Suicide in Hungary-epidemiological and clinical perspectives 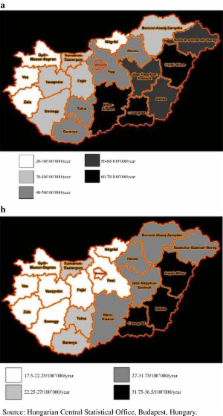 Annual suicide rates of Hungary were unexpectedly high in the previous century. In our narrative review, we try to depict, with presentation of the raw data, the main descriptive epidemiological features of the Hungarian suicide scene of the past decades. Accordingly, we present the annual suicide rates of the period mentioned and also data on how they varied by gender, age, urban vs. rural living, seasons, marital status, etc. Furthermore, the overview of trends of other factors that may have influenced suicidal behavior (e.g., alcohol and tobacco consumption, antidepressant prescription, unemployment rate) in the past decades is appended as well. Based on raw data and also on results of the relevant papers of Hungarian suicidology we tried to explain the observable trends of the Hungarian suicide rate. Eventually, we discuss the results, the possibilities, and the future tasks of suicide prevention in Hungary.

Toward a clinical model of suicidal behavior in psychiatric patients.

Jeffrey Mann,  John K. Malone,  Juergen G. Haas … (1999)
Risk factors for suicide attempts have rarely been studied comprehensively in more than one psychiatric disorder, preventing estimation of the relative importance and the generalizability of different putative risk factors across psychiatric diagnoses. The authors conducted a study of suicide attempts in patients with mood disorders, psychoses, and other diagnoses. Their goal was to determine the generalizability and relative importance of risk factors for suicidal acts across diagnostic boundaries and to develop a hypothetical, explanatory, and predictive model of suicidal behavior that can subsequently be tested in a prospective study. Following admission to a university psychiatric hospital, 347 consecutive patients who were 14-72 years old (51% were male and 68% were Caucasian) were recruited for study. Structured clinical interviews generated axis I and axis II diagnoses. Lifetime suicidal acts, traits of aggression and impulsivity, objective and subjective severity of acute psychopathology, developmental and family history, and past substance abuse or alcoholism were assessed. Objective severity of current depression or psychosis did not distinguish the 184 patients who had attempted suicide from those who had never attempted suicide. However, higher scores on subjective depression, higher scores on suicidal ideation, and fewer reasons for living were reported by suicide attempters. Rates of lifetime aggression and impulsivity were also greater in attempters. Comorbid borderline personality disorder, smoking, past substance use disorder or alcoholism, family history of suicidal acts, head injury, and childhood abuse history were more frequent in suicide attempters. The authors propose a stress-diathesis model in which the risk for suicidal acts is determined not merely by a psychiatric illness (the stressor) but also by a diathesis. This diathesis may be reflected in tendencies to experience more suicidal ideation and to be more impulsive and, therefore, more likely to act on suicidal feelings. Prospective studies are proposed to test this model.

Gender differences in depression in 23 European countries. Cross-national variation in the gender gap in depression.

Piet Bracke,  Katia Levecque,  Sarah Velde (2010)
One of the most consistent findings in the social epidemiology of mental health is the gender gap in depression. Depression is approximately twice as prevalent among women as it is among men. However, the absence of comparable data hampers cross-national comparisons of the prevalence of depression in general populations. Using information about the frequency and severity of depressive symptoms from the third wave of the European Social Survey (ESS-3), we are able to fill the gap the absence of comparable data leaves. In the ESS-3, depression is measured with an eight-item version of the Center for Epidemiological Studies-Depression Scale. In the current study, we examine depression among men and women aged 18-75 in 23 European countries. Our results indicate that women report higher levels of depression than men do in all countries, but there is significant cross-national variation in this gender gap. Gender differences in depression are largest in some of the Eastern and Southern European countries and smallest in Ireland, Slovakia and some Nordic countries. Hierarchical linear models show that socioeconomic as well as family-related factors moderate the relationship between gender and depression. Lower risk of depression is associated in both genders with marriage and cohabiting with a partner as well as with having a generally good socioeconomic position. In a majority of countries, socioeconomic factors have the strongest association with depression in both men and women. This research contributes new findings, expanding the small existing body of literature that presents highly comparable data on the prevalence of depression in women and men in Europe. Copyright 2010 Elsevier Ltd. All rights reserved.

Decreased risk of suicides and attempts during long-term lithium treatment: a meta-analytic review.

A R Baldessarini,  Leonardo Tondo,  John Hennen … (2006)
To update and extend comparisons of rates of suicides and suicide attempts among patients with major affective disorders with versus without long-term lithium treatment. Broad searching yielded 45 studies providing rates of suicidal acts during lithium treatment, including 34 also providing rates without lithium treatment. We scored study quality, tested between-study variance, and examined suicidal rates on versus off lithium by meta-analytic methods to determine risk ratios (RRs) and 95% confidence intervals (CI). In 31 studies suitable for meta-analysis, involving a total of 85,229 person-years of risk-exposure, the overall risk of suicides and attempts was five times less among lithium-treated subjects than among those not treated with lithium (RR = 4.91, 95% CI 3.82-6.31, p < 0.0001). Similar effects were found with other meta-analytic methods, as well as for completed versus attempted suicide, and for bipolar versus major mood disorder patients. Studies with higher quality ratings, including randomized, controlled trials, involved shorter exposures with somewhat lesser lithium superiority. Omitting one very large study or those involving lithium-discontinuation had little effect on the results. The incidence-ratio of attempts-to-suicides increased 2.5 times with lithium-treatment, indicating reduced lethality of suicidal acts. There was no indication of bias toward reporting positive findings, nor were outcomes significantly influenced by publication-year or study size. Risks of completed and attempted suicide were consistently lower, by approximately 80%, during treatment of bipolar and other major affective disorder patients with lithium for an average of 18 months. These benefits were sustained in randomized as well as open clinical trials.