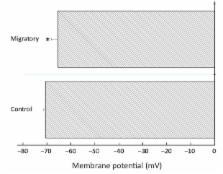 A variety of ion channels have been implicated in breast cancer proliferation and metastasis. Voltage-gated K + (Kv) channels not only cause repolarization in excitable cells, but are also involved in multiple cellular functions in non-excitable cells. In this study we investigated the role of Kv channels in migration of BT474 breast cancer cells.

Transwell technique was used to separate migratory cells from non-migratory ones and these two groups of cells were subject to electrophysiological examinations and microfluorimetric measurements for cytosolic Ca 2+. Cell migration was examined in the absence or presence of Kv channel blockers.

Taken together, our results show that increased Kv channel expression played a role in BT474 cell migration, and Kv channels could be considered as biomarkers or potential therapeutic targets for breast cancer metastasis. The mechanism(s) by which Kv channels enhanced migration appeared unrelated to membrane hyperpolarization and Ca 2+ influx.

Orai1 and STIM1 are critical for breast tumor cell migration and metastasis.

The voltage-gated potassium channels and their relatives.

Gary Yellen (2002)
The voltage-gated potassium channels are the prototypical members of a family of membrane signalling proteins. These protein-based machines have pores that pass millions of ions per second across the membrane with astonishing selectivity, and their gates snap open and shut in milliseconds as they sense changes in voltage or ligand concentration. The architectural modules and functional components of these sophisticated signalling molecules are becoming clear, but some important links remain to be elucidated.

This work is licensed under a Creative Commons Attribution-Non Commercial-Share Alike 4.0 Unported License. To view a copy of this license, visit http://creativecommons.org/licenses/by-nc-sa/4.0/