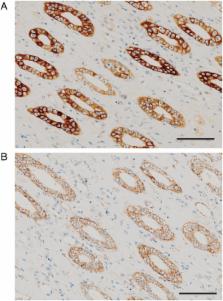 Journal: Annals of the Rheumatic Diseases

A genome-wide association study (GWAS) of gout and its subtypes was performed to identify novel gout loci, including those that are subtype-specific.

Putative causal association signals from a GWAS of 945 clinically defined gout cases and 1213 controls from Japanese males were replicated with 1396 cases and 1268 controls using a custom chip of 1961 single nucleotide polymorphisms (SNPs). We also first conducted GWASs of gout subtypes. Replication with Caucasian and New Zealand Polynesian samples was done to further validate the loci identified in this study.

In addition to the five loci we reported previously, further susceptibility loci were identified at a genome-wide significance level (p<5.0×10 −8): urate transporter genes ( SLC22A12 and SLC17A1) and HIST1H2BF-HIST1H4E for all gout cases, and NIPAL1 and FAM35A for the renal underexcretion gout subtype. While NIPAL1 encodes a magnesium transporter, functional analysis did not detect urate transport via NIPAL1, suggesting an indirect association with urate handling. Localisation analysis in the human kidney revealed expression of NIPAL1 and FAM35A mainly in the distal tubules, which suggests the involvement of the distal nephron in urate handling in humans. Clinically ascertained male patients with gout and controls of Caucasian and Polynesian ancestries were also genotyped, and FAM35A was associated with gout in all cases. A meta-analysis of the three populations revealed FAM35A to be associated with gout at a genome-wide level of significance (p meta =3.58×10 −8).

Our findings including novel gout risk loci provide further understanding of the molecular pathogenesis of gout and lead to a novel concept for the therapeutic target of gout/hyperuricaemia.

Hitoshi Endou,  Atsushi Enomoto,  Takashi Sekine … (2002)
Urate, a naturally occurring product of purine metabolism, is a scavenger of biological oxidants implicated in numerous disease processes, as demonstrated by its capacity of neuroprotection. It is present at higher levels in human blood (200 500 microM) than in other mammals, because humans have an effective renal urate reabsorption system, despite their evolutionary loss of hepatic uricase by mutational silencing. The molecular basis for urate handling in the human kidney remains unclear because of difficulties in understanding diverse urate transport systems and species differences. Here we identify the long-hypothesized urate transporter in the human kidney (URAT1, encoded by SLC22A12), a urate anion exchanger regulating blood urate levels and targeted by uricosuric and antiuricosuric agents (which affect excretion of uric acid). Moreover, we provide evidence that patients with idiopathic renal hypouricaemia (lack of blood uric acid) have defects in SLC22A12. Identification of URAT1 should provide insights into the nature of urate homeostasis, as well as lead to the development of better agents against hyperuricaemia, a disadvantage concomitant with human evolution.

Identification of a urate transporter, ABCG2, with a common functional polymorphism causing gout.

Eric Boerwinkle,  William Guggino,  Josef Coresh … (2009)
Genome-wide association studies (GWAS) have successfully identified common single nucleotide polymorphisms (SNPs) associated with a wide variety of complex diseases, but do not address gene function or establish causality of disease-associated SNPs. We recently used GWAS to identify SNPs in a genomic region on chromosome 4 that associate with serum urate levels and gout, a consequence of elevated urate levels. Here we show using functional assays that human ATP-binding cassette, subfamily G, 2 (ABCG2), encoded by the ABCG2 gene contained in this region, is a hitherto unknown urate efflux transporter. We further show that native ABCG2 is located in the brush border membrane of kidney proximal tubule cells, where it mediates renal urate secretion. Introduction of the mutation Q141K encoded by the common SNP rs2231142 by site-directed mutagenesis resulted in 53% reduced urate transport rates compared to wild-type ABCG2 (P < 0.001). Data from a population-based study of 14,783 individuals support rs2231142 as the causal variant in the region and show highly significant associations with urate levels [whites: P = 10(-30), minor allele frequency (MAF) 0.11; blacks P = 10(-4), MAF 0.03] and gout (adjusted odds ratio 1.68 per risk allele, both races). Our data indicate that at least 10% of all gout cases in whites are attributable to this causal variant. With approximately 3 million US individuals suffering from often insufficiently treated gout, ABCG2 represents an attractive drug target. Our study completes the chain of evidence from association to causation and supports the common disease-common variant hypothesis in the etiology of gout.

Decreased extra-renal urate excretion is a common cause of hyperuricemia

AN, HNakaoka, KY, MS, AS and YT contributed equally.