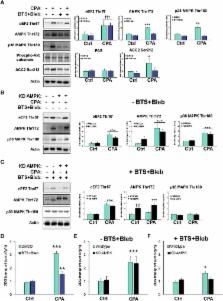 A role for AMP-activated protein kinase in contraction- and hypoxia-regulated glucose transport in skeletal muscle.

James Mu,  Joseph T. Brozinick,  Otto Valladares … (2001)
Eukaryotic cells possess systems for sensing nutritional stress and inducing compensatory mechanisms that minimize the consumption of ATP while utilizing alternative energy sources. Such stress can also be imposed by increased energy needs, such as in skeletal muscle of exercising animals. In these studies, we consider the role of the metabolic sensor, AMP-activated protein kinase (AMPK), in the regulation of glucose transport in skeletal muscle. Expression in mouse muscle of a dominant inhibitory mutant of AMPK completely blocked the ability of hypoxia or AICAR to activate hexose uptake, while only partially reducing contraction-stimulated hexose uptake. These data indicate that AMPK transmits a portion of the signal by which muscle contraction increases glucose uptake, but other AMPK-independent pathways also contribute to the response.

Allison O’Neill,  Justin Crane,  Bente Kiens … (2011)
AMP-activated protein kinase (AMPK) β1 or β2 subunits are required for assembling of AMPK heterotrimers and are important for regulating enzyme activity and cellular localization. In skeletal muscle, α2β2γ3-containing heterotrimers predominate. However, compensatory up-regulation and redundancy of AMPK subunits in whole-body AMPK α2, β2, and γ3 null mice has made it difficult to determine the physiological importance of AMPK in regulating muscle metabolism, because these models have normal mitochondrial content, contraction-stimulated glucose uptake, and insulin sensitivity. In the current study, we generated mice lacking both AMPK β1 and β2 isoforms in skeletal muscle (β1β2M-KO). β1β2M-KO mice are physically inactive and have a drastically impaired capacity for treadmill running that is associated with reductions in skeletal muscle mitochondrial content but not a fiber-type switch. Interestingly, young β1β2M-KO mice fed a control chow diet are not obese or insulin resistant but do have impaired contraction-stimulated glucose uptake. These data demonstrate an obligatory role for skeletal muscle AMPK in maintaining mitochondrial capacity and contraction-stimulated glucose uptake, findings that were not apparent in mice with single mutations or deletions in muscle α, β, or γ subunits.

Knockout of the alpha2 but not alpha1 5'-AMP-activated protein kinase isoform abolishes 5-aminoimidazole-4-carboxamide-1-beta-4-ribofuranosidebut not contraction-induced glucose uptake in skeletal muscle.

Fabrizio Andreelli,  Jesper Birk,  Peter Schjerling … (2004)
We investigated the importance of the two catalytic alpha-isoforms of the 5'-AMP-activated protein kinase (AMPK) in 5-aminoimidazole-4-carboxamide-1-beta-4-ribofuranoside (AICAR) and contraction-induced glucose uptake in skeletal muscle. Incubated soleus and EDL muscle from whole-body alpha2- or alpha1-AMPK knockout (KO) and wild type (WT) mice were incubated with 2.0 mm AICAR or electrically stimulated to contraction. Both AICAR and contraction increased 2DG uptake in WT muscles. KO of alpha2, but not alpha1, abolished AICAR-induced glucose uptake, whereas neither KO affected contraction-induced glucose uptake. AICAR and contraction increased alpha2- and alpha1-AMPK activity in wild type (WT) muscles. During AICAR stimulation, the remaining AMPK activity in KO muscles increased to the same level as in WT. During contraction, the remaining AMPK activity in alpha2-KO muscles was elevated by 100% probably explained by a 2-3-fold increase in alpha1-protein. In alpha1-KO muscles, alpha2-AMPK activity increased to similar levels as in WT. Both interventions increased total AMPK activity, as expressed by AMPK-P and ACCbeta-P, in WT muscles. During AICAR stimulation, this was dramatically reduced in alpha2-KO but not in alpha1-KO, whereas during contraction, both measurements were essentially similar to WT in both KO-muscles. The results show that alpha2-AMPK is the main donor of basal and AICAR-stimulated AMPK activity and is responsible for AICAR-induced glucose uptake. In contrast, during contraction, the two alpha-isoforms seem to substitute for each other in terms of activity, which may explain the normal glucose uptake despite the lack of either alpha2- or alpha1-AMPK. Alternatively, neither alpha-isoform of AMPK is involved in contraction-induced muscle glucose uptake.