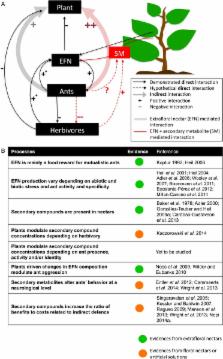 Many plant-derived chemicals may have an impact on the functioning of the animal brain. The mechanisms by which the psychoactive components of these various products have their effects have been widely described, but the question of why they have these effects has been almost totally ignored. Recent evidence suggests that plants may produce chemicals to manipulate their partner ants and to make reciprocation more beneficial. In the present review we propose that these plant-derived chemicals could have evolved in plants to attract and manipulate ant behaviour; this would place the plant–animal interaction in a different ecological context and open new ecological and neurobiological perspectives for drug seeking and use.

Plant–ant interactions are generally considered as mutualisms, with both parties gaining benefits from the association. It has recently emerged that some of these mutualistic associations have, however, evolved towards other forms of relationships and, in particular, that plants may manipulate their partner ants to make reciprocation more beneficial, thereby stabilizing the mutualism. Focusing on plants bearing extrafloral nectaries, we review recent studies and address three key questions: (i) how can plants attract potential partners and maintain their services; (ii) are there compounds in extrafloral nectar that could mediate partner manipulation; and (iii) are ants susceptible to such compounds? After reviewing the current knowledge on plant–ant associations, we propose a possible scenario where plant-derived chemicals, such as secondary metabolites, known to have an impact on animal brain, could have evolved in plants to attract and manipulate ant behaviour. This new viewpoint would place plant–animal interaction in a different ecological context, opening new ecological and neurobiological perspectives of drug seeking and use.

The Geographic Mosaic of Coevolution

Martin Heil (2007)
Many plants interact with carnivores as an indirect defence against herbivores. The release of volatile organic compounds (VOCs) and the secretion of extrafloral nectar (EFN) are induced by insect feeding, a response that is mediated by the plant hormone, jasmonic acid. Although VOCs mainly attract predatory mites and parasitic wasps, while EFN mainly attracts ants, many more animal-plant interactions are influenced by these two traits. Other traits involved in defensive tritrophic interactions are cellular food bodies and domatia, which serve the nutrition and housing of predators. They are not known to respond to herbivory, while food body production can be induced by the presence of the mutualists. Interactions among the different defensive traits, and between them and other biotic and abiotic factors exist on the genetic, physiological, and ecological levels, but so far remain understudied. Indirect defences are increasingly being discussed as an environmentally-friendly crop protection strategy, but much more knowledge on their fitness effects under certain environmental conditions is required before we can understand their ecological and evolutionary relevance, and before tritrophic interactions can serve as a reliable tool in agronomy.