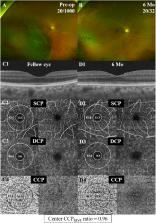 We retrospectively reviewed 31 eyes that underwent pars plana vitrectomy for primary RRD. Eyes with macula-off and macula-on RRD were compared with healthy fellow eyes. Both OCT and OCTA were performed 6 months after surgery, and the macula-off RRD group was divided into two subgroups according to the presence of an outer retinal defect. The correlations between postoperative best-corrected visual acuity (BCVA) at 6 months and SS-OCT and OCTA measurements were analyzed.

Improvements on Littmann's method of determining the size of retinal features by fundus photography.

David Bennett,  Alicja R. Rudnicka,  D Edgar … (1994)
Littmann's formula relating the size of a retinal feature to its measured image size on a telecentric fundus camera film is widely used. It requires only the corneal radius, ametropia, and Littmann's factor q obtained from nomograms or tables. These procedures are here computerized for practitioners' convenience. Basic optical principles are discussed, showing q to be a constant fraction of the theoretical ocular dimension k', the distance from the eye's second principal point to the retina. If the eye's axial length is known, three new methods of determining q become available: (a) simply reducing the axial length by a constant 1.82 mm; (b) constructing a personalized schematic eye, given additional data; (c) ray tracing through this eye to extend calculations to peripheral retinal areas. Results of all these evaluations for 12 subjects of known ocular dimensions are presented for comparison. Method (a), the simplest, is arguably the most reliable. It shows good agreement with Littmann's supplementary procedure when the eye's axial length is known.

Marion Munk,  Helena Giannakaki-Zimmermann,  Lieselotte Berger … (2017)
Purpose To compare the quality of four OCT-angiography(OCT-A) modules. Method The retina of nineteen healthy volunteers were scanned with four OCT-devices (Topcon DRI-OCT Triton Swept-source OCT, Optovue RTVue-XR, a prototype Spectralis OCT2, Heidelberg-Engineering and Zeiss Cirrus 5000-HD-OCT). The device-software generated en-face OCT-A images of the superficial (SCP) and deep capillary plexuses (DCP) were evaluated and scored by 3 independent retinal imaging experts. The SCP vessel density was assessed using Angiotool-software. After the inter-grader reliability assessment, a consensus grading was performed and the modules were ranked based on their scoring. Results There was no significant difference in the vessel density among the modules (Zeiss 48.7±4%, Optovue 47.9±3%, Topcon 48.3±2%, Heidelberg 46.5±4%, p = 0.2). The numbers of discernible vessel-bifurcations differed significantly on each module (Zeiss 2±0.9 bifurcations, Optovue 2.5±1.2, Topcon 1.3±0.7 and Heidelberg 0.5±0.6, p≤0.001). The ranking of each module differed depending on the evaluated parameter. In the overall ranking, the Zeiss module was superior and in 90% better than the median (Bonferroni corrected p-value = 0.04). Optovue was better than the median in 60%, Topcon in 40% and Heidelberg module in 10%, however these differences were not statistically significant. Conclusion Each of the four evaluated OCT-A modules had particular strengths, which differentiated it from their competitors.

Alexander Ross (2002)
With modern surgical techniques to repair retinal detachments, a greater than 90% primary anatomic success rate can be expected. Despite this high level of anatomic success, visual results remain compromised mainly because of permanent functional damage once the macula becomes detached. The most important predictor of visual recovery after retinal detachment surgery is preoperative visual acuity. Preoperative acuity appears to be directly related to the height of macular detachment. Shorter duration of detachment and younger age are also important in visual recovery. This paper will review the current literature that helps to improve our understanding of visual recovery after macula-off retinal detachments.

EHH and HC contributed equally to this work.