The role of fibrosis in Duchenne muscular dystrophy 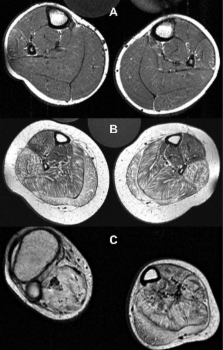 Muscular dystrophies such as Duchenne muscular dystrophy (DMD) are usually approached as dysfunctions of the affected skeletal myofibres and their force transmission. Comparatively little attention has been given to the increase in connective tissue (fibrosis) which accompanies these muscular changes. Interestingly, an increase in endomysial tissue is apparent long before any muscular degeneration can be observed. Fibrosis is the result of a reactive or reparative process involving mechanical, humoral and cellular factors. Originating from vulnerable myofibres, muscle cell necrosis and inflammatory processes are present in DMD. Muscular recovery is limited due to the limited number and capacity of satellite cells. Hence, a proactive and multimodal approach is necessary in order to activate protective mechanisms and to hinder catabolic and tissue degrading pathways.

Several avenues are discussed in terms of potential antifibrotic therapy approaches. These include pharmaceutical, nutritional, exercise-based and other mechanostimulatory modalities (such as massage or yoga-like stretching) with the intention of exerting an anti-inflammatory and antifibrotic effect on the affected muscular tissues. A preventive intervention at an early age is crucial, based on the early and seemingly non-reversible nature of the fibrotic tissue changes. Since consistent assessment is essential, different measurement technologies are discussed.

Muscles, exercise and obesity: skeletal muscle as a secretory organ.

Mark A. Febbraio,  Dan B Pedersen (2012)
During the past decade, skeletal muscle has been identified as a secretory organ. Accordingly, we have suggested that cytokines and other peptides that are produced, expressed and released by muscle fibres and exert either autocrine, paracrine or endocrine effects should be classified as myokines. The finding that the muscle secretome consists of several hundred secreted peptides provides a conceptual basis and a whole new paradigm for understanding how muscles communicate with other organs, such as adipose tissue, liver, pancreas, bones and brain. However, some myokines exert their effects within the muscle itself. Thus, myostatin, LIF, IL-6 and IL-7 are involved in muscle hypertrophy and myogenesis, whereas BDNF and IL-6 are involved in AMPK-mediated fat oxidation. IL-6 also appears to have systemic effects on the liver, adipose tissue and the immune system, and mediates crosstalk between intestinal L cells and pancreatic islets. Other myokines include the osteogenic factors IGF-1 and FGF-2; FSTL-1, which improves the endothelial function of the vascular system; and the PGC-1α-dependent myokine irisin, which drives brown-fat-like development. Studies in the past few years suggest the existence of yet unidentified factors, secreted from muscle cells, which may influence cancer cell growth and pancreas function. Many proteins produced by skeletal muscle are dependent upon contraction; therefore, physical inactivity probably leads to an altered myokine response, which could provide a potential mechanism for the association between sedentary behaviour and many chronic diseases.

Boris Hinz,  Sem H Phan,  Victor Thannickal … (2012)
The discovery of the myofibroblast has opened new perspectives for the comprehension of the biological mechanisms involved in wound healing and fibrotic diseases. In recent years, many advances have been made in understanding important aspects of myofibroblast basic biological characteristics. This review summarizes such advances in several fields, such as the following: i) force production by the myofibroblast and mechanisms of connective tissue remodeling; ii) factors controlling the expression of α-smooth muscle actin, the most used marker of myofibroblastic phenotype and, more important, involved in force generation by the myofibroblast; and iii) factors affecting genesis of the myofibroblast and its differentiation from precursor cells, in particular epigenetic factors, such as DNA methylation, microRNAs, and histone modification. We also review the origin and the specific features of the myofibroblast in diverse fibrotic lesions, such as systemic sclerosis; kidney, liver, and lung fibrosis; and the stromal reaction to certain epithelial tumors. Finally, we summarize the emerging strategies for influencing myofibroblast behavior in vitro and in vivo, with the ultimate goal of an effective therapeutic approach for myofibroblast-dependent diseases. Copyright © 2012 American Society for Investigative Pathology. Published by Elsevier Inc. All rights reserved.

Assessment of antioxidant capacity in vitro and in vivo.

Etsuo Niki (2010)
The role and beneficial effects of antioxidants against various disorders and diseases induced by oxidative stress have received much attention. Many types of antioxidants with different functions play their role in the defense network in vivo. The free radical scavenging antioxidants are one of the important classes of antioxidants and the assessment of their capacity has been the subject of extensive studies and argument. Various methods have been developed and applied in different systems, but many available methods result in inconsistent results. There is no simple universal method by which antioxidant capacity can be assessed accurately and quantitatively. In this review article, the available methods are critically reviewed on the basis of the mechanisms and dynamics of antioxidant action, and the methods are proposed to assess the capacity of radical scavenging and inhibition of lipid peroxidation both in vitro and in vivo. It is emphasized that the prevailing competition methods such as oxygen radical absorption capacity (ORAC) using a reference probe may be useful for assessing the capacity for scavenging free radicals but that such methods do not evaluate the characteristics of antioxidants and do not necessarily show the capacity to suppress the oxidation, that is, antioxidation. It is recommended that the capacity of antioxidant compounds and their mixtures for antioxidation should be assessed from their effect on the levels of plasma lipid peroxidation in vitro and biomarkers of oxidative stress in vivo. Copyright (c) 2010 Elsevier Inc. All rights reserved.

This is an Open Access article distributed under the terms of the Creative Commons Attribution Non-Commercial No Derivatives License, which permits for noncommercial use, distribution, and reproduction in any digital medium, provided the original work is properly cited and is not altered in any way. For details, please refer to http://creativecommons.org/licenses/by-nc-nd/3.0/