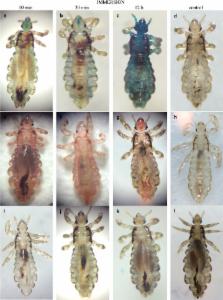 Chemical, physical, and mechanical methods are used to control human lice. Attempts have been made to eradicate head lice Pediculus humanus capitis by hot air, soaking in various fluids or asphyxiation using occlusive treatments. In this study, we assessed the maximum time that head lice can survive anoxia (oxygen deprivation) and their ability to survive prolonged water immersion. We also observed the ingress of fluids across louse tracheae and spiracle characteristics contrasting with those described in the literature. We showed that 100% of lice can withstand 8 h of anoxia and 12.2% survived 14 h of anoxia; survival was 48.9% in the untreated control group at 14 h. However, all lice had died following 16 h of anoxia. In contrast, the survival rate of water-immersed lice was significantly higher when compared with non-immersed lice after 6 h (100% vs. 76.6%, p = 0.0037), and 24 h (50.9% vs. 15.9%, p = 0.0003). Although water-immersed lice did not close their spiracles, water did not penetrate into the respiratory system. In contrast, immersion in colored dimeticone/cyclomethicone or colored ethanol resulted in penetration through the spiracles and spreading to the entire respiratory system within 30 min, leading to death in 100% of the lice.

O Chosidow (2000)
Scabies and pediculosis are ubiquitous, contagious, and debilitating parasitic dermatoses. They have been known since antiquity and are distributed worldwide. Clusters of infestation occur-for example, scabies affecting immunocompromised individuals or patients and staff in hospitals and nursing homes for the elderly, and pediculosis affecting schoolchildren or homeless people. Associations with other disorders are common: infections with human T-cell leukaemia/lymphoma virus I (HTLV-I) and HIV are associated with scabies, and trench fever and exanthematous typhus with pediculosis. Specific forms of scabies, including bullous scabies or localised crusted scabies, may be misdiagnosed. Moreover, definitive parasitic diagnosis can be difficult to obtain, and the value of new techniques remains to be confirmed. Difficulties in management have returned scabies and pediculosis to the limelight.

R Durand,  S Bouvresse,  Z. Berdjane … (2012)
Insecticide treatment resistance is considered to be a major factor in the increasing number of infestations by head lice. The large insecticide selection pressure induced by conventional topical pediculicides has led to the emergence and spread of resistance in many parts of the world. Possible mechanisms of resistance include accelerated detoxification of insecticides by enzyme-mediated reduction, esterification, oxidation that may be overcome by synergistic agents such as piperonyl butoxide, alteration of the binding site, e.g. altered acetylcholinesterase or altered nerve voltage-gated sodium channel, and knockdown resistance (kdr). Clinical, parasitological and molecular data on resistance to conventional topical pediculicides show that treatments with neurotoxic insecticides have suffered considerable loss of activity worldwide. In particular, resistance to synthetic pyrethroids has become prominent, probably because of their extensive use. As other treatment options, including non-insecticidal pediculicides such as dimeticone, are now available, the use of older insecticides, such as lindane and carbaryl, should be minimized, owing to their loss of efficacy and safety concerns. The organophosphorus insecticide malathion remains effective, except in the UK, mostly in formulations that include terpineol. © 2012 The Authors. Clinical Microbiology and Infection © 2012 European Society of Clinical Microbiology and Infectious Diseases.