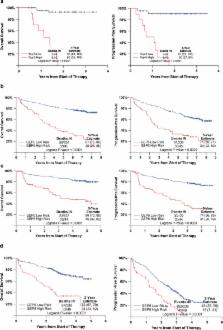 A validated gene expression model of high-risk multiple myeloma is defined by deregulated expression of genes mapping to chromosome 1.

Prediction of survival in multiple myeloma based on gene expression profiles reveals cell cycle and chromosomal instability signatures in high-risk patients and hyperdiploid signatures in low-risk patients: a study of the Intergroupe Francophone du Myélome.

Hervé Avet-Loiseau,  O Decaux,  R Bataille … (2008)
Survival of patients with multiple myeloma is highly heterogeneous, from periods of a few weeks to more than 10 years. We used gene expression profiles of myeloma cells obtained at diagnosis to identify broadly applicable prognostic markers. In a training set of 182 patients, we used supervised methods to identify individual genes associated with length of survival. A survival model was built from these genes. The validity of our model was assessed in our test set of 68 patients and in three independent cohorts comprising 853 patients with multiple myeloma. The 15 strongest genes associated with the length of survival were used to calculate a risk score and to stratify patients into low-risk and high-risk groups. The survival-predictor score was significantly associated with survival in both the training and test sets and in the external validation cohorts. The Kaplan-Meier estimates of rates of survival at 3 years were 90.5% (95% CI, 85.6% to 95.3%) and 47.4% (95% CI, 33.5% to 60.1%), respectively, in our patients having a low risk or high risk independently of traditional prognostic factors. High-risk patients constituted a homogeneous biologic entity characterized by the overexpression of genes involved in cell cycle progression and its surveillance, whereas low-risk patients were heterogeneous and displayed hyperdiploid signatures. Gene expression-based survival prediction and molecular features associated with high-risk patients may be useful for developing prognostic markers and may provide basis to treat these patients with new targeted antimitotics.

Nijiro Nohata,  Yaeko Sone,  Toyoyuki Hanazawa … (2011)
Based on the microRNA (miRNA) expression signatures of hypopharyngeal and esophageal squamous cell carcinoma, we found that miR-1 was significantly down-regulated in cancer cells. In this study, we investigated the functional significance of miR-1 in head and neck squamous cell carcinoma (HNSCC) cells and identified miR-1-regulated novel cancer pathways. Gain-of-function studies using miR-1 revealed significant decreases in HNSCC cell proliferation, invasion, and migration. In addition, the promotion of cell apoptosis and cell cycle arrest was demonstrated following miR-1 transfection of cancer cells. A search for the targets of miR-1 revealed that transgelin 2 (TAGLN2) was directly regulated by miR-1. Silencing of TAGLN2 significantly inhibited cell proliferation and invasion in HNSCC cells. Down-regulation of miR-1 and up-regulation of TAGLN2 were confirmed in HNSCC clinical specimens. Our data indicate that TAGLN2 may have an oncogenic function and may be regulated by miR-1, a tumor suppressive miRNA in HNSCC. The identification of novel miR-1-regulated cancer pathways could provide new insights into potential molecular mechanisms of HNSCC carcinogenesis.