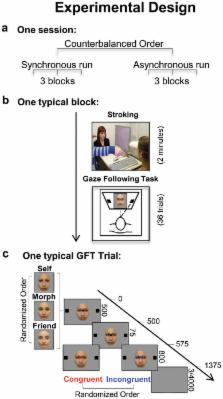 One's own face and gaze are never seen directly but only in a mirror. Yet, these stimuli capture attention more powerfully than others' face and gaze, suggesting the self is special for brain and behavior. Synchronous touches felt on one's own and seen on the face of others induce the sensation of including others in one's own face (enfacement). We demonstrate that enfacement may also reduce the overwhelming distracting power of self-gaze. This effect, hereafter called ‘engazement', depends on the perceived physical attractiveness and inner beauty of the pair partner. Thus, we highlight for the first time the close link between enfacement and engazement by showing that changes of the self-face representation induced by facial visuo-tactile stimulation extend to gaze following, a separate process likely underpinned by different neural substrates. Moreover, although gaze following is a largely automatic, engazement is penetrable to the influence of social variables, such as positive interpersonal perception.

Measuring individual differences in empathy: Evidence for a multidimensional approach.

The reorienting system of the human brain: from environment to theory of mind.

Maurizio Corbetta,  Gaurav Patel,  Gordon Shulman (2008)
Survival can depend on the ability to change a current course of action to respond to potentially advantageous or threatening stimuli. This "reorienting" response involves the coordinated action of a right hemisphere dominant ventral frontoparietal network that interrupts and resets ongoing activity and a dorsal frontoparietal network specialized for selecting and linking stimuli and responses. At rest, each network is distinct and internally correlated, but when attention is focused, the ventral network is suppressed to prevent reorienting to distracting events. These different patterns of recruitment may reflect inputs to the ventral attention network from the locus coeruleus/norepinephrine system. While originally conceptualized as a system for redirecting attention from one object to another, recent evidence suggests a more general role in switching between networks, which may explain recent evidence of its involvement in functions such as social cognition.