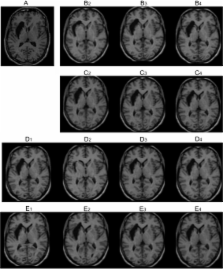 A key component of group analyses of neuroimaging data is precise and valid spatial normalization (i.e., inter-subject image registration). When patients have structural brain lesions, such as a stroke, this process can be confounded by the lack of correspondence between the subject and standardized template images. Current procedures for dealing with this problem include regularizing the estimate of warping parameters used to match lesioned brains to the template, or “cost function masking”; both these solutions have significant drawbacks. We report three experiments that identify the best spatial normalization for structurally damaged brains and establish whether differences among normalizations have a significant effect on inferences about functional activations. Our novel protocols evaluate the effects of different normalization solutions and can be applied easily to any neuroimaging study. This has important implications for users of both structural and functional imaging techniques in the study of patients with structural brain damage.

Karl Friston,  John Ashburner (2005)
A probabilistic framework is presented that enables image registration, tissue classification, and bias correction to be combined within the same generative model. A derivation of a log-likelihood objective function for the unified model is provided. The model is based on a mixture of Gaussians and is extended to incorporate a smooth intensity variation and nonlinear registration with tissue probability maps. A strategy for optimising the model parameters is described, along with the requisite partial derivatives of the objective function.

J. Ashburner,  Karl Friston (1999)
We describe a comprehensive framework for performing rapid and automatic nonlabel-based nonlinear spatial normalizations. The approach adopted minimizes the residual squared difference between an image and a template of the same modality. In order to reduce the number of parameters to be fitted, the nonlinear warps are described by a linear combination of low spatial frequency basis functions. The objective is to determine the optimum coefficients for each of the bases by minimizing the sum of squared differences between the image and template, while simultaneously maximizing the smoothness of the transformation using a maximum a posteriori (MAP) approach. Most MAP approaches assume that the variance associated with each voxel is already known and that there is no covariance between neighboring voxels. The approach described here attempts to estimate this variance from the data, and also corrects for the correlations between neighboring voxels. This makes the same approach suitable for the spatial normalization of both high-quality magnetic resonance images, and low-resolution noisy positron emission tomography images. A fast algorithm has been developed that utilizes Taylor's theorem and the separable nature of the basis functions, meaning that most of the nonlinear spatial variability between images can be automatically corrected within a few minutes.