How unrealistic optimism is maintained in the face of reality 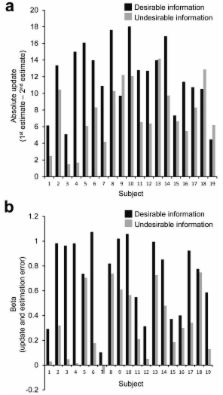 Unrealistic optimism is a pervasive human trait influencing domains ranging from personal relationships to politics and finance. How people maintain unrealistic optimism, despite frequently encountering information that challenges those biased beliefs, is unknown. Here, we provide an explanation. Specifically, we show a striking asymmetry, whereby people updated their beliefs more in response to information that was better than expected compared to information that was worse. This selectivity was mediated by a relative failure to code for errors that should reduce optimism. Distinct regions of the prefrontal cortex tracked estimation errors when those called for positive update, both in highly optimistic and low optimistic individuals. However, highly optimistic individuals exhibited reduced tracking of estimation errors that called for negative update within right inferior prefrontal gyrus. These findings show that optimism is tied to a selective update failure, and diminished neural coding, of undesirable information regarding the future.

Distinguishing optimism from neuroticism (and trait anxiety, self-mastery, and self-esteem): a reevaluation of the Life Orientation Test.

Michael F Scheier, Charles S. Carver, Michael W. Bridges (1994)
Research on dispositional optimism as assessed by the Life Orientation Test (Scheier & Carver, 1985) has been challenged on the grounds that effects attributed to optimism are indistinguishable from those of unmeasured third variables, most notably, neuroticism. Data from 4,309 subjects show that associations between optimism and both depression and aspects of coping remain significant even when the effects of neuroticism, as well as the effects of trait anxiety, self-mastery, and self-esteem, are statistically controlled. Thus, the Life Orientation Test does appear to possess adequate predictive and discriminant validity. Examination of the scale on somewhat different grounds, however, does suggest that future applications can benefit from its revision. Thus, we also describe a minor modification to the Life Orientation Test, along with data bearing on the revised scale's psychometric properties.

Illusion and well-being: a social psychological perspective on mental health.

Benjamin M J Owens, R Lefebvre, R Abbott … (1989)
The effect of dispositional optimism on recovery from coronary artery bypass surgery was examined in a group of 51 middle-aged men. Patients provided information at three points in time--(a) on the day before surgery, (b) 6-8 days postoperatively, and (c) 6 months postoperatively. Information was obtained relating to the patient's rate of physical recovery, mood, and postsurgical quality of life. Information was also gathered regarding the manner in which the patients attempted to cope with the stress of the surgery and its aftermath. As expected, dispositional optimism proved to be an important predictor of coping efforts and of surgical outcomes. More specifically, dispositional optimism (as assessed prior to surgery) correlated positively with manifestations of problem-focused coping and negatively with the use of denial. Dispositional optimism was also associated with a faster rate of physical recovery during the period of hospitalization and with a faster rate of return to normal life activities subsequent to discharge. Finally, there was a strong positive association between level of optimism and postsurgical quality of life at 6 months.