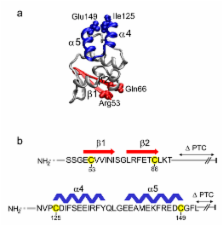 Although tertiary folding of whole protein domains is prohibited by the cramped dimensions of the ribosomal tunnel, dynamic tertiary interactions may permit folding of small elementary units within the tunnel. To probe this possibility, we used a β-hairpin as well as an α-helical hairpin from the cytosolic N-terminus of a voltage-gated potassium channel and determined a probability of folding for each at defined locations inside and outside the tunnel. Minimalist tertiary structures can form near the exit port of the tunnel, a region that provides an entropic window for initial exploration of local peptide conformations. Tertiary subdomains of the nascent peptide fold sequentially, but not independently, during translation. These studies offer an approach for diagnosing the molecular basis for folding defects that lead to protein malfunction and provide insight into the role of the ribosome during early potassium channel biogenesis.

Interfaces and the driving force of hydrophobic assembly.

David J. Chandler (2005)
The hydrophobic effect--the tendency for oil and water to segregate--is important in diverse phenomena, from the cleaning of laundry, to the creation of micro-emulsions to make new materials, to the assembly of proteins into functional complexes. This effect is multifaceted depending on whether hydrophobic molecules are individually hydrated or driven to assemble into larger structures. Despite the basic principles underlying the hydrophobic effect being qualitatively well understood, only recently have theoretical developments begun to explain and quantify many features of this ubiquitous phenomenon.

The complete atomic structure of the large ribosomal subunit at 2.4 A resolution.

Jeffrey T. Steitz,  N Ban,  Johnni Hansen … (2000)
The large ribosomal subunit catalyzes peptide bond formation and binds initiation, termination, and elongation factors. We have determined the crystal structure of the large ribosomal subunit from Haloarcula marismortui at 2.4 angstrom resolution, and it includes 2833 of the subunit's 3045 nucleotides and 27 of its 31 proteins. The domains of its RNAs all have irregular shapes and fit together in the ribosome like the pieces of a three-dimensional jigsaw puzzle to form a large, monolithic structure. Proteins are abundant everywhere on its surface except in the active site where peptide bond formation occurs and where it contacts the small subunit. Most of the proteins stabilize the structure by interacting with several RNA domains, often using idiosyncratically folded extensions that reach into the subunit's interior.

The structural basis of ribosome activity in peptide bond synthesis.

Peter Hansen,  N Ban,  Blake Moore … (2000)
Using the atomic structures of the large ribosomal subunit from Haloarcula marismortui and its complexes with two substrate analogs, we establish that the ribosome is a ribozyme and address the catalytic properties of its all-RNA active site. Both substrate analogs are contacted exclusively by conserved ribosomal RNA (rRNA) residues from domain V of 23S rRNA; there are no protein side-chain atoms closer than about 18 angstroms to the peptide bond being synthesized. The mechanism of peptide bond synthesis appears to resemble the reverse of the acylation step in serine proteases, with the base of A2486 (A2451 in Escherichia coli) playing the same general base role as histidine-57 in chymotrypsin. The unusual pK(a) (where K(a) is the acid dissociation constant) required for A2486 to perform this function may derive in part from its hydrogen bonding to G2482 (G2447 in E. coli), which also interacts with a buried phosphate that could stabilize unusual tautomers of these two bases. The polypeptide exit tunnel is largely formed by RNA but has significant contributions from proteins L4, L22, and L39e, and its exit is encircled by proteins L19, L22, L23, L24, L29, and L31e.