Status, quality and specific needs of Zika virus (ZIKV) diagnostic capacity and capability in National Reference Laboratories for arboviruses in 30 EU/EEA countries, May 2016 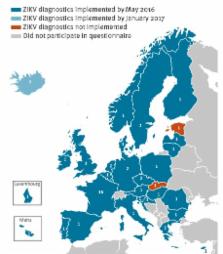 With international travel, Zika virus (ZIKV) is introduced to Europe regularly. A country's ability to robustly detect ZIKV introduction and local transmission is important to minimise the risk for a ZIKV outbreak. Therefore, sufficient expertise and diagnostic capacity and capability are required in European laboratories. To assess the capacity, quality, operational specifics (guidelines and algorithms), technical and interpretation issues and other possible difficulties that were related to ZIKV diagnostics in European countries, a questionnaire was conducted among national reference laboratories in 30 countries in the European Union/European Economic Area (EU/EEA) in May 2016. While the coverage and capacity of ZIKV diagnostics in the EU/EEA national reference laboratories were found to be adequate, the assessment of the quality and needs indicated several crucial points of improvement that will need support at national and EU/EEA level to improve ZIKV preparedness, response and EU/EEA ZIKV surveillance activities.

Zika Virus Infection as a Cause of Congenital Brain Abnormalities and Guillain–Barré Syndrome: Systematic Review

Fabienne Krauer,  Maurane Riesen,  Ludovic Reveiz … (2017)
Background The World Health Organization (WHO) stated in March 2016 that there was scientific consensus that the mosquito-borne Zika virus was a cause of the neurological disorder Guillain–Barré syndrome (GBS) and of microcephaly and other congenital brain abnormalities based on rapid evidence assessments. Decisions about causality require systematic assessment to guide public health actions. The objectives of this study were to update and reassess the evidence for causality through a rapid and systematic review about links between Zika virus infection and (a) congenital brain abnormalities, including microcephaly, in the foetuses and offspring of pregnant women and (b) GBS in any population, and to describe the process and outcomes of an expert assessment of the evidence about causality. Methods and Findings The study had three linked components. First, in February 2016, we developed a causality framework that defined questions about the relationship between Zika virus infection and each of the two clinical outcomes in ten dimensions: temporality, biological plausibility, strength of association, alternative explanations, cessation, dose–response relationship, animal experiments, analogy, specificity, and consistency. Second, we did a systematic review (protocol number CRD42016036693). We searched multiple online sources up to May 30, 2016 to find studies that directly addressed either outcome and any causality dimension, used methods to expedite study selection, data extraction, and quality assessment, and summarised evidence descriptively. Third, WHO convened a multidisciplinary panel of experts who assessed the review findings and reached consensus statements to update the WHO position on causality. We found 1,091 unique items up to May 30, 2016. For congenital brain abnormalities, including microcephaly, we included 72 items; for eight of ten causality dimensions (all except dose–response relationship and specificity), we found that more than half the relevant studies supported a causal association with Zika virus infection. For GBS, we included 36 items, of which more than half the relevant studies supported a causal association in seven of ten dimensions (all except dose–response relationship, specificity, and animal experimental evidence). Articles identified nonsystematically from May 30 to July 29, 2016 strengthened the review findings. The expert panel concluded that (a) the most likely explanation of available evidence from outbreaks of Zika virus infection and clusters of microcephaly is that Zika virus infection during pregnancy is a cause of congenital brain abnormalities including microcephaly, and (b) the most likely explanation of available evidence from outbreaks of Zika virus infection and GBS is that Zika virus infection is a trigger of GBS. The expert panel recognised that Zika virus alone may not be sufficient to cause either congenital brain abnormalities or GBS but agreed that the evidence was sufficient to recommend increased public health measures. Weaknesses are the limited assessment of the role of dengue virus and other possible cofactors, the small number of comparative epidemiological studies, and the difficulty in keeping the review up to date with the pace of publication of new research. Conclusions Rapid and systematic reviews with frequent updating and open dissemination are now needed both for appraisal of the evidence about Zika virus infection and for the next public health threats that will emerge. This systematic review found sufficient evidence to say that Zika virus is a cause of congenital abnormalities and is a trigger of GBS.

Victor M Corman,  Andrea Rasche,  Cecile Baronti … (2016)
Abstract Objective To examine the diagnostic performance of real-time reverse transcription (RT)-polymerase chain reaction (PCR) assays for Zika virus detection. Methods We compared seven published real-time RT–PCR assays and two new assays that we have developed. To determine the analytical sensitivity of each assay, we constructed a synthetic universal control ribonucleic acid (uncRNA) containing all of the assays’ target regions on one RNA strand and spiked human blood or urine with known quantities of African or Asian Zika virus strains. Viral loads in 33 samples from Zika virus-infected patients were determined by using one of the new assays. Findings Oligonucleotides of the published real-time RT–PCR assays, showed up to 10 potential mismatches with the Asian lineage causing the current outbreak, compared with 0 to 4 mismatches for the new assays. The 95% lower detection limit of the seven most sensitive assays ranged from 2.1 to 12.1 uncRNA copies/reaction. Two assays had lower sensitivities of 17.0 and 1373.3 uncRNA copies/reaction and showed a similar sensitivity when using spiked samples. The mean viral loads in samples from Zika virus-infected patients were 5 × 104 RNA copies/mL of blood and 2 × 104 RNA copies/mL of urine. Conclusion We provide reagents and updated protocols for Zika virus detection suitable for the current outbreak strains. Some published assays might be unsuitable for Zika virus detection, due to the limited sensitivity and potential incompatibility with some strains. Viral concentrations in the clinical samples were close to the technical detection limit, suggesting that the use of insensitive assays will cause false-negative results.

[1 ]Department of Viroscience, Erasmus University Medical Centre, Rotterdam, the Netherlands
[2 ]European Centre for Disease Prevention and Control, Stockholm, Sweden
[3 ]Netherlands Centre for Infectious Disease Control, Bilthoven, the Netherlands
[4 ]The members of the ZIKV reference laboratory group are listed at the end of the article