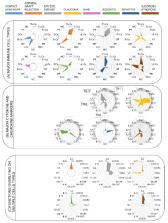 Ocular surface inflammatory disorder (OSID) is a spectrum of disorders that have features of several etiologies whilst displaying similar phenotypic signs of ocular inflammation. They are complicated disorders with underlying mechanisms related to several autoimmune disorders, such as rheumatoid arthritis (RA), Sjögren’s syndrome, and systemic lupus erythematosus (SLE). Current literature shows the involvement of both innate and adaptive arms of the immune system in ocular surface inflammation. The ocular surface contains distinct components of the immune system in the conjunctiva and the cornea. The normal conjunctiva epithelium and sub-epithelial stroma contains resident immune cells, such as T cells, B cells (adaptive), dendritic cells, and macrophages (innate). The relative sterile environment of the cornea is achieved by the tolerogenic properties of dendritic cells in the conjunctiva, the presence of regulatory lymphocytes, and the existence of soluble immunosuppressive factors, such as the transforming growth factor (TGF)-β and macrophage migration inhibitory factors. With the presence of both innate and adaptive immune system components, it is intriguing to investigate the most important leukocyte population in the ocular surface, which is involved in immune surveillance. Our meta-analysis investigates into this with a focus on both infectious (contact lens wear, corneal graft rejection, Cytomegalovirus, keratitis, scleritis, ocular surgery) and non-infectious (dry eye disease, glaucoma, graft-vs-host disease, Sjögren’s syndrome) situations. We have found the predominance of dendritic cells in ocular surface diseases, along with the Th-related cytokines. Our goal is to improve the knowledge of immune cells in OSID and to open new dimensions in the field. The purpose of this study is not to limit ourselves in the ocular system, but to investigate the importance of dendritic cells in the disorders of other mucosal organs (e.g., lungs, gut, uterus). Holistically, we want to investigate if this is a common trend in the initiation of any disease related to the mucosal organs and find a unified therapeutic approach. In addition, we want to show the power of computational approaches to foster a collaboration between computational and biological science.

Matthew Collin,  Naomi McGovern,  Muzlifah Haniffa (2013)
Dendritic cells are highly adapted to their role of presenting antigen and directing immune responses. Developmental studies indicate that DCs originate independently from monocytes and tissue macrophages. Emerging evidence also suggests that distinct subsets of DCs have intrinsic differences that lead to functional specialisation in the generation of immunity. Comparative studies are now allowing many of these properties to be more fully understood in the context of human immunology.

Tomer Granot,  Takashi Senda,  Dustin Carpenter … (2017)
Maturation and migration to lymph nodes (LNs) constitutes a central paradigm in conventional dendritic cell (cDC) biology but remains poorly defined in humans. Using our organ donor tissue resource, we analyzed cDC subset distribution, maturation, and migration in mucosal tissues (lungs, intestines), associated lymph nodes (LNs), and other lymphoid sites from 78 individuals ranging from less than 1 year to 93 years of age. The distribution of cDC1 (CD141(hi)CD13(hi)) and cDC2 (Sirp-α(+)CD1c(+)) subsets was a function of tissue site and was conserved between donors. We identified cDC2 as the major mature (HLA-DR(hi)) subset in LNs with the highest frequency in lung-draining LNs. Mature cDC2 in mucosal-draining LNs expressed tissue-specific markers derived from the paired mucosal site, reflecting their tissue-migratory origin. These distribution and maturation patterns were largely maintained throughout life, with site-specific variations. Our findings provide evidence for localized DC tissue surveillance and reveal a lifelong division of labor between DC subsets, with cDC2 functioning as guardians of the mucosa.