Cryopreservation of human colorectal carcinomas prior to xenografting 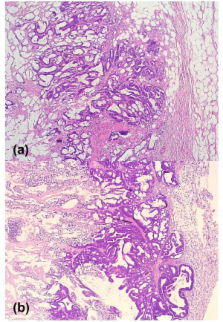 Molecular heterogeneity of colorectal carcinoma (CRC) is well recognized, forming the rationale for molecular tests required before administration of some of the novel targeted therapies that now are rapidly entering the clinics. For clinical research at least, but possibly even for future individualized tumor treatment on a routine basis, propagation of patients' CRC tissue may be highly desirable for detailed molecular, biochemical or functional analyses. However, complex logistics requiring close liaison between surgery, pathology, laboratory researchers and animal care facilities are a major drawback in this. We here describe and evaluate a very simple cryopreservation procedure for colorectal carcinoma tissue prior to xenografting that will considerably reduce this logistic complexity.

Fourty-eight CRC collected ad hoc were xenografted subcutaneously into immunodeficient mice either fresh from surgery (N = 23) or after cryopreservation (N = 31; up to 643 days).

Take rates after cryopreservation were satisfactory (71%) though somewhat lower than with tumor tissues fresh from surgery (74%), but this difference was not statistically significant. Re-transplantation of cryopreserved established xenografts (N = 11) was always successful. Of note, in this series, all of the major molecular types of CRC were xenografted successfully, even after cryopreservation.

Our procedure facilitates collection, long-time storage and propagation of clinical CRC specimens (even from different centres) for (pre)clinical studies of novel therapies or for basic research.

The genomic landscapes of human breast and colorectal cancers.

Joong-Ki Park,  Dennis Ballinger,  Giovanni Parmigiani … (2007)
Human cancer is caused by the accumulation of mutations in oncogenes and tumor suppressor genes. To catalog the genetic changes that occur during tumorigenesis, we isolated DNA from 11 breast and 11 colorectal tumors and determined the sequences of the genes in the Reference Sequence database in these samples. Based on analysis of exons representing 20,857 transcripts from 18,191 genes, we conclude that the genomic landscapes of breast and colorectal cancers are composed of a handful of commonly mutated gene "mountains" and a much larger number of gene "hills" that are mutated at low frequency. We describe statistical and bioinformatic tools that may help identify mutations with a role in tumorigenesis. These results have implications for understanding the nature and heterogeneity of human cancers and for using personal genomics for tumor diagnosis and therapy.

Wild-type KRAS is required for panitumumab efficacy in patients with metastatic colorectal cancer.

J. Freeman,  Eric van der Helm,  Marc Peeters … (2008)
Panitumumab, a fully human antibody against the epidermal growth factor receptor (EGFR), has activity in a subset of patients with metastatic colorectal cancer (mCRC). Although activating mutations in KRAS, a small G-protein downstream of EGFR, correlate with poor response to anti-EGFR antibodies in mCRC, their role as a selection marker has not been established in randomized trials. KRAS mutations were detected using polymerase chain reaction on DNA from tumor sections collected in a phase III mCRC trial comparing panitumumab monotherapy to best supportive care (BSC). We tested whether the effect of panitumumab on progression-free survival (PFS) differed by KRAS status. KRAS status was ascertained in 427 (92%) of 463 patients (208 panitumumab, 219 BSC). KRAS mutations were found in 43% of patients. The treatment effect on PFS in the wild-type (WT) KRAS group (hazard ratio [HR], 0.45; 95% CI: 0.34 to 0.59) was significantly greater (P < .0001) than in the mutant group (HR, 0.99; 95% CI, 0.73 to 1.36). Median PFS in the WT KRAS group was 12.3 weeks for panitumumab and 7.3 weeks for BSC. Response rates to panitumumab were 17% and 0%, for the WT and mutant groups, respectively. WT KRAS patients had longer overall survival (HR, 0.67; 95% CI, 0.55 to 0.82; treatment arms combined). Consistent with longer exposure, more grade III treatment-related toxicities occurred in the WT KRAS group. No significant differences in toxicity were observed between the WT KRAS group and the overall population. Panitumumab monotherapy efficacy in mCRC is confined to patients with WT KRAS tumors. KRAS status should be considered in selecting patients with mCRC as candidates for panitumumab monotherapy.

Edward Sausville,  Mick Burger (2006)
Mouse models of cancer have consistently been used to qualify new anticancer drugs for study in human clinical trials. The most used models include transplantable murine tumors grown in syngeneic hosts and xenografts of human tumors grown in immunodeficient mice. For the latter systems, retrospective preclinical-clinical correlation studies are available, which suggest that improvements must be made to increase their value. Transgenic, knock-out, and knock-in mouse models and their intercrosses are more recent developments that mirror defined steps of human carcinogenesis. However, their value in predicting clinical results remains to date poorly defined. We take the position that properly used and interpreted human tumor xenografts grown in immunodeficient mice can be useful, although not absolutely predictive of behavior in the clinic, and continue to make contributions to critical clinical development choices.