Probiotic Therapy: A Promising Strategy for the Control of Canine Hookworm 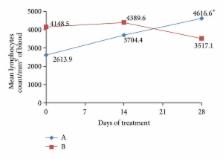 Canis familiaris is a domestic animal which plays an important role as a pet; however, it is very likely to develop diseases characterized by high morbidity and mortality. In this sense, there are some Ancylostomatidae species that can lead to anemia, weight loss, and abdominal pain. Therefore, the treatment with allopathic drugs is essential for eliminating the parasitism. However, the increasing occurrence of resistance to allopathic treatments stimulates the search for new therapeutic inputs, among which the probiotics stand out and are able to positively alter the intestinal microbiota and exert immunomodulatory effect. Therefore, the present study aimed to evaluate the applicability of using species of Lactobacillus ( L. acidophilus ATCC 4536, L. plantarum ATCC 8014, and L. delbrueckii UFV H2B20) to control canine ancylostomiasis. A probiotic preparation containing 1 × 10 6 CFU of each strain was administered to 10 naturally infected animals, on alternate days for 28 days. It was observed that the treatment with the probiotic preparation led to a significant reduction in EPG of feces (88.83%/ P < 0.05), as well as an increase in leukocyte and lymphocyte counts, highlighting the potential use of Lactobacillus species in the control of canine ancylostomiasis.

Maria G. Vizoso-Pinto,  Charles M. A. P. Franz,  Ulrich Schillinger … (2006)
Lactobacillus strains from traditional African fermented milk products, as well as human intestinal isolates were identified and investigated in vitro for their technological and functional characteristics as potential new probiotic strains. To test survival under gastrointestinal conditions, first the protective effect of milk and the effects of medium composition, lysozyme, pepsin, and pH of the medium on bacterial viability were assessed in vitro using the Plackett-Burman statistical model and the commercially used L. johnsonii LA1 probiotic strain. The use of either an artificial gastric electrolyte solution or MRS did not play a significant role in the viability of the cultures, while lysozyme, acidic conditions (pH 2.5), pepsin and the presence of milk significantly influenced the survival of the strain. Therefore, these parameters were selected as important test variables in a model stomach passage survival trial. Five strains identified as L. plantarum and two identified as L. johnsonii showed good survival under simulated gastrointestinal conditions. These selected strains also showed antimicrobial activity, probably due to production of organic acids. All strains exhibited bile salt hydrolase activity, while only the L. plantarum strains showed beta-galactosidase activity.

Prevalence of intestinal parasites in pet dogs in the United States.

Susan Little,  Eileen M Johnson,  David Lewis … (2009)
To determine the national, regional, and age-related prevalence of intestinal parasites in dogs presenting to veterinarians in the United States, we reviewed the results of examination via zinc sulfate centrifugal flotation of 1,199,293 canine fecal samples submitted to Antech Diagnostics in 2006. The most commonly identified intestinal parasites were ascarids (2.2%), hookworms (2.5%), whipworms (1.2%), Giardia (4.0%), and Cystoisospora (4.4%). With the exception of whipworms, intestinal parasites were more commonly identified in dogs less than 6 months of age (29.6% positive) as compared to those greater than 1 year of age (6.1% positive) although infections with each parasite considered were identified in all age classes of dogs. Hookworm eggs were most commonly identified in fecal samples submitted from dogs from the South (4.0% positive), whereas ascarid eggs and Giardia cysts were most commonly seen in samples from dogs from the West (2.8% and 6.3% positive, respectively). When compared to previous data from shelter dogs, the prevalence of intestinal helminths, particularly ascarids and hookworms, was greatly suppressed in pet dogs in the southern United States (90-91% reduction) and much less so in dogs in the West (52-78% reduction), perhaps due in part to the routine year-round use of monthly anthelmintics effective at controlling both heartworm infection and intestinal helminths in dogs in the South. Taken together these data indicate that intestinal parasites remain a common, important finding in dogs presenting to veterinary practices although in most of the country infection rates in pet dogs appear to be greatly reduced from the level reported from dogs in animal shelters.

Probiotics to enhance anti-infective defences in the gastrointestinal tract.

H Gill (2003)
Several clinical studies have demonstrated the therapeutic and/or prophylactic efficacy of specific probiotics against acute viral gastroenteritis and antibiotic-associated diarrhoea (including Clostridium difficile infection). Emerging evidence also suggests beneficial effects against Helicobacter pylori infection. The evidence of efficacy against traveller's diarrhoea remains, however, inconclusive. The precise mechanisms by which probiotics potentiate host gastrointestinal defences and mediate protection are not fully known. There is evidence to suggest, however, that probiotics might contribute to host defence by reinforcing non-immunological defences and stimulating both specific and non-specific host immune responses. Little is known about the relative importance of the probiotic-stimulated mechanisms in host protection. This review summarises the evidence for the anti-infective effects of probiotics and discusses the effect of orally delivered probiotics on non-immunological and immunological defence mechanisms in the host, especially in the gastrointestinal tract.