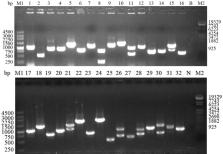 Eimeria acervulina is one of seven Eimeria spp. that can infect chicken duodenal epithelial cells. Eimeria microneme protein 3 (MIC3) plays a vital role in the invasion of host epithelial tissue by the parasite. In this study, we found that chicken ( Gallus gallus) ubiquitin conjugating enzyme E2F (UBE2F) could bind to the MIC3 protein of E. acervulina (EaMIC3), as screened using the yeast two-hybrid system, and that it might be the putative receptor protein of EaMIC3. The UBE2F gene was cloned from chicken duodenal epithelial cells. The recombinant protein of UBE2F (rUBE2F) was expressed in E. coli and the reactogenicity of rUBE2F was analyzed by Western blot. Gene sequencing revealed that the opening reading frame (ORF) of UBE2F was 558 base pairs and encoded a protein of 186 amino acids with a molecular weight of 20.46 kDa. The predicted UBE2F protein did not contain signal peptides or a transmembrane region, but had multiple O-glycosylation and phosphorylation sites. A phylogenetic analysis showed that the chicken UBE2F protein is closely related to those of quail and pigeon (Coturnix japonica and Columba livia). A sporozoite invasion-blocking assay showed that antisera against rUBE2F significantly inhibited the invasion of E. acervulina sporozoites in vitro. Animal experiments indicated that the antisera could significantly enhance average body weight gains and reduce mean lesion scores following a challenge with E. acervulina. These results therefore imply that the chicken UBE2F protein might be the target receptor molecule of EaMIC3 that is involved in E. acervulina invasion.

R G Spiro (2002)
Formation of the sugar-amino acid linkage is a crucial event in the biosynthesis of the carbohydrate units of glycoproteins. It sets into motion a complex series of posttranslational enzymatic steps that lead to the formation of a host of protein-bound oligosaccharides with diverse biological functions. These reactions occur throughout the entire phylogenetic spectrum, ranging from archaea and eubacteria to eukaryotes. It is the aim of this review to describe the glycopeptide linkages that have been found to date and specify their presence on well-characterized glycoproteins. A survey is also made of the enzymes involved in the formation of the various glycopeptide bonds as well as the site of their intracellular action and their affinity for particular peptide domains is evaluated. This examination indicates that 13 different monosaccharides and 8 amino acids are involved in glycoprotein linkages leading to a total of at least 41 bonds, if the anomeric configurations, the phosphoglycosyl linkages, as well as the GPI (glycophosphatidylinositol) phosphoethanolamine bridge are also considered. These bonds represent the products of N- and O-glycosylation, C-mannosylation, phosphoglycation, and glypiation. Currently at least 16 enzymes involved in their formation have been identified and in many cases cloned. Their intracellular site of action varies and includes the endoplasmic reticulum, Golgi apparatus, cytosol, and nucleus. With the exception of the Asn-linked carbohydrate and the GPI anchor, which are transferred to the polypeptide en bloc, the sugar-amino acid linkages are formed by the enzymatic transfer of an activated monosaccharide directly to the protein. This review also deals briefly with glycosidases, which are involved in physiologically important cleavages of glycopeptide bonds in higher organisms, and with a number of human disease states in which defects in enzymatic transfer of saccharides to protein have been implicated.

The two-hybrid system: a method to identify and clone genes for proteins that interact with a protein of interest.

R Sternglanz,  Barry S Fields,  David Bartel … (1991)
We describe a method that detects proteins capable of interacting with a known protein and that results in the immediate availability of the cloned genes for these interacting proteins. Plasmids are constructed to encode two hybrid proteins. One hybrid consists of the DNA-binding domain of the yeast transcriptional activator protein GAL4 fused to the known protein; the other hybrid consists of the GAL4 activation domain fused to protein sequences encoded by a library of yeast genomic DNA fragments. Interaction between the known protein and a protein encoded by one of the library plasmids leads to transcriptional activation of a reporter gene containing a binding site for GAL4. We used this method with the yeast SIR4 protein, which is involved in the transcriptional repression of yeast mating type information. (i) We used the two-hybrid system to demonstrate that SIR4 can form homodimers. (ii) A small domain consisting of the C terminus of SIR4 was shown to be sufficient to mediate this interaction. (iii) We screened a library to detect hybrid proteins that could interact with the SIR4 C-terminal domain and identified SIR4 from this library. This approach could be readily extended to mammalian proteins by the construction of appropriate cDNA libraries in the activation domain plasmid.

Vern B. Carruthers,  F. TOMLEY (2007)
Microneme secretion supports several key cellular processes including gliding motility, active cell invasion and migration through cells, biological barriers, and tissues. The modular design of microneme proteins enables these molecules to assist each other in folding and passage through the quality control system, accurately target to the micronemes, oligimerizing with other parasite proteins, and engaging a variety of host receptors for migration and cell invasion. Structural and biochemical analyses of MIC domains is providing new perspectives on how adhesion is regulated and the potentially distinct roles MICs might play in long or short range interactions during parasite attachment and entry. New access to complete genome sequences and ongoing advances in genetic manipulation should provide fertile ground for refining current models and defining exciting new roles for MICs in apicomplexan biology.

Authors with the same contribution to this paper.