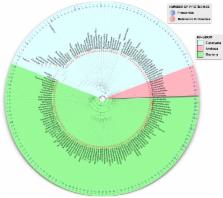 The UniProt knowledgebase is a large resource of protein sequences and associated detailed annotation. The database contains over 60 million sequences, of which over half a million sequences have been curated by experts who critically review experimental and predicted data for each protein. The remainder are automatically annotated based on rule systems that rely on the expert curated knowledge. Since our last update in 2014, we have more than doubled the number of reference proteomes to 5631, giving a greater coverage of taxonomic diversity. We implemented a pipeline to remove redundant highly similar proteomes that were causing excessive redundancy in UniProt. The initial run of this pipeline reduced the number of sequences in UniProt by 47 million. For our users interested in the accessory proteomes, we have made available sets of pan proteome sequences that cover the diversity of sequences for each species that is found in its strains and sub-strains. To help interpretation of genomic variants, we provide tracks of detailed protein information for the major genome browsers. We provide a SPARQL endpoint that allows complex queries of the more than 22 billion triples of data in UniProt ( http://sparql.uniprot.org/). UniProt resources can be accessed via the website at http://www.uniprot.org/.

Sue Richards, Nazneen Aziz, Sherri Bale … (2015)
The American College of Medical Genetics and Genomics (ACMG) previously developed guidance for the interpretation of sequence variants. 1 In the past decade, sequencing technology has evolved rapidly with the advent of high-throughput next generation sequencing. By adopting and leveraging next generation sequencing, clinical laboratories are now performing an ever increasing catalogue of genetic testing spanning genotyping, single genes, gene panels, exomes, genomes, transcriptomes and epigenetic assays for genetic disorders. By virtue of increased complexity, this paradigm shift in genetic testing has been accompanied by new challenges in sequence interpretation. In this context, the ACMG convened a workgroup in 2013 comprised of representatives from the ACMG, the Association for Molecular Pathology (AMP) and the College of American Pathologists (CAP) to revisit and revise the standards and guidelines for the interpretation of sequence variants. The group consisted of clinical laboratory directors and clinicians. This report represents expert opinion of the workgroup with input from ACMG, AMP and CAP stakeholders. These recommendations primarily apply to the breadth of genetic tests used in clinical laboratories including genotyping, single genes, panels, exomes and genomes. This report recommends the use of specific standard terminology: ‘pathogenic’, ‘likely pathogenic’, ‘uncertain significance’, ‘likely benign’, and ‘benign’ to describe variants identified in Mendelian disorders. Moreover, this recommendation describes a process for classification of variants into these five categories based on criteria using typical types of variant evidence (e.g. population data, computational data, functional data, segregation data, etc.). Because of the increased complexity of analysis and interpretation of clinical genetic testing described in this report, the ACMG strongly recommends that clinical molecular genetic testing should be performed in a CLIA-approved laboratory with results interpreted by a board-certified clinical molecular geneticist or molecular genetic pathologist or equivalent.

Baris Suzek, Hongzhan Huang, Peter McGarvey … (2007)
Redundant protein sequences in biological databases hinder sequence similarity searches and make interpretation of search results difficult. Clustering of protein sequence space based on sequence similarity helps organize all sequences into manageable datasets and reduces sampling bias and overrepresentation of sequences. The UniRef (UniProt Reference Clusters) provide clustered sets of sequences from the UniProt Knowledgebase (UniProtKB) and selected UniProt Archive records to obtain complete coverage of sequence space at several resolutions while hiding redundant sequences. Currently covering >4 million source sequences, the UniRef100 database combines identical sequences and subfragments from any source organism into a single UniRef entry. UniRef90 and UniRef50 are built by clustering UniRef100 sequences at the 90 or 50% sequence identity levels. UniRef100, UniRef90 and UniRef50 yield a database size reduction of approximately 10, 40 and 70%, respectively, from the source sequence set. The reduced redundancy increases the speed of similarity searches and improves detection of distant relationships. UniRef entries contain summary cluster and membership information, including the sequence of a representative protein, member count and common taxonomy of the cluster, the accession numbers of all the merged entries and links to rich functional annotation in UniProtKB to facilitate biological discovery. UniRef has already been applied to broad research areas ranging from genome annotation to proteomics data analysis. UniRef is updated biweekly and is available for online search and retrieval at http://www.uniprot.org, as well as for download at ftp://ftp.uniprot.org/pub/databases/uniprot/uniref. Supplementary data are available at Bioinformatics online.

Duccio Medini, Claudio Donati, Hervé Tettelin … (2005)
A decade after the beginning of the genomic era, the question of how genomics can describe a bacterial species has not been fully addressed. Experimental data have shown that in some species new genes are discovered even after sequencing the genomes of several strains. Mathematical modeling predicts that new genes will be discovered even after sequencing hundreds of genomes per species. Therefore, a bacterial species can be described by its pan-genome, which is composed of a "core genome" containing genes present in all strains, and a "dispensable genome" containing genes present in two or more strains and genes unique to single strains. Given that the number of unique genes is vast, the pan-genome of a bacterial species might be orders of magnitude larger than any single genome.