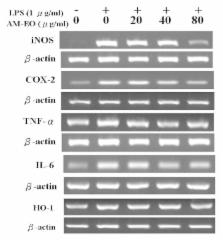 Achillea millefolium L. is a member of the Asteraceae family and has been used in folk medicine in many countries. In this study, 19 compounds in A. millefolium essential oil (AM-EO) have been identified; the major components are artemisia ketone (14.92%), camphor (11.64%), linalyl acetate (11.51%) and 1,8-cineole (10.15%). AM-EO can suppress the inflammatory responses of lipopolysaccharides (LPS)-stimulated RAW 264.7 macrophages, including decreased levels of cellular nitric oxide (NO) and superoxide anion production, lipid peroxidation and glutathione (GSH) concentration. This antioxidant activity is not a result of increased superoxide dismutase (SOD), catalase (CAT), glutathione peroxidase (GPx) activities, but rather occurs as a result of the down-regulation of inducible nitric oxide synthase (iNOS), cyclooxygenase-2 (COX-2), tumor necrosis factor-α (TNF-α), interleukin-6 (IL-6) and heme oxygenase-1 (HO-1) expression, thus reducing the inflammatory response. Therefore, AM-EO can be utilized in many applications, including the treatment of inflammatory diseases in the future.

Antioxidant and Anti-Inflammatory Activities of Essential Oils: A Short Review

Dagmar Quandt,  Manuela Rossol,  Undine Meusch … (2010)
Lipopolysaccharide (LPS) from Gram-negative bacteria is one of the most potent innate immune-activating stimuli known. Here we review the current understanding of LPS effects on human monocyte and macrophage function. We provide an overview of LPS signal transduction with attention given to receptor cooperativity and species differences in LPS responses, as well as the role of tyrosine phosphorylation and lysine acetylation in signalling. We also review LPS-regulated transcription, with emphasis on chromatin remodeling and primary versus secondary transcriptional control mechanisms. Finally, we review the regulation and function of LPS-inducible cytokines produced by human monocytes and macrophages including TNFα, the IL-1 family, IL-6, IL-8, the IL-10 family, the IL-12 family, IL-15 and TGFβ.