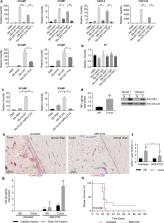 One of the most prominent features of glioblastoma (GBM) is hyper-vascularization. Bone marrow-derived macrophages are actively recruited to the tumor and referred to as glioma-associated macrophages (GAMs) which are thought to provide a critical role in tumor neo-vascularization. However, the mechanisms by which GAMs regulate endothelial cells (ECs) in the process of tumor vascularization and response to anti-angiogenic therapy (AATx) is not well-understood. Here we show that GBM cells secrete IL-8 and CCL2 which stimulate GAMs to produce TNFα. Subsequently, TNFα induces a distinct gene expression signature of activated ECs including VCAM-1, ICAM-1, CXCL5, and CXCL10. Inhibition of TNFα blocks GAM-induced EC activation both in vitro and in vivo and improve survival in mouse glioma models. Importantly we show that high TNFα expression predicts worse response to Bevacizumab in GBM patients. We further demonstrated in mouse model that treatment with B20.4.1.1, the mouse analog of Bevacizumab, increased macrophage recruitment to the tumor area and correlated with upregulated TNFα expression in GAMs and increased EC activation, which may be responsible for the failure of AATx in GBMs. These results suggest TNFα is a novel therapeutic that may reverse resistance to AATx. Future clinical studies should be aimed at inhibiting TNFα as a concurrent therapy in GBMs.

Radiotherapy plus Concomitant and Adjuvant Temozolomide for Glioblastoma

Chemokines: a new classification system and their role in immunity.