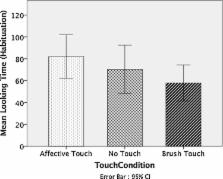 Touch provides more than sensory input for discrimination of what is on the skin. From early in development it has a rewarding and motivational value, which may reflect an evolutionary mechanism that promotes learning and affiliative bonding. In the present study we investigated whether affective touch helps infants tune to social signals, such as faces. Four-month-old infants were habituated to an individual face with averted gaze, which typically does not engage infants to the same extent as direct gaze does. As in a previous study, in the absence of touch, infants did not learn the identity of this face. Critically, 4-month-old infants did learn to discriminate this face when parents provided gentle stroking, but they did not when they experienced a non-social tactile stimulation. A preliminary follow-up eye-tracking study (Supplementary material) revealed no significant difference in the visual scanning of faces between touch and no-touch conditions, suggesting that affective touch may not affect the distribution of visual attention, but that it may promote more efficient learning of facial information.

C Caldji,  P M Plotsky,  J Diorio … (1997)
Variations in maternal care affect the development of individual differences in neuroendocrine responses to stress in rats. As adults, the offspring of mothers that exhibited more licking and grooming of pups during the first 10 days of life showed reduced plasma adrenocorticotropic hormone and corticosterone responses to acute stress, increased hippocampal glucocorticoid receptor messenger RNA expression, enhanced glucocorticoid feedback sensitivity, and decreased levels of hypothalamic corticotropin-releasing hormone messenger RNA. Each measure was significantly correlated with the frequency of maternal licking and grooming (all r's > -0.6). These findings suggest that maternal behavior serves to "program" hypothalamic-pituitary-adrenal responses to stress in the offspring.

Maternal care during infancy regulates the development of neural systems mediating the expression of fearfulness in the rat.

B Tannenbaum,  S. Sharma,  D. Francis … (1998)
The mothers of infant rats show individual differences in the frequency of licking/grooming and arched-back nursing (LG-ABN) of pups that contribute to the development of individual differences in behavioral responses to stress. As adults, the offspring of mothers that exhibited high levels of LG-ABN showed substantially reduced behavioral fearfulness in response to novelty compared with the offspring of low LG-ABN mothers. In addition, the adult offspring of the high LG-ABN mothers showed significantly (i) increased central benzodiazepine receptor density in the central, lateral, and basolateral nuclei of the amygdala as well as in the locus ceruleus, (ii) increased alpha2 adrenoreceptor density in the locus ceruleus, and (iii) decreased corticotropin-releasing hormone (CRH) receptor density in the locus ceruleus. The expression of fear and anxiety is regulated by a neural circuitry that includes the activation of ascending noradrenergic projections from the locus ceruleus to the forebrain structures. Considering the importance of the amygdala, notably the anxiogenic influence of CRH projections from the amygdala to the locus ceruleus, as well as the anxiolytic actions of benzodiazepines, for the expression of behavioral responses to stress, these findings suggest that maternal care during infancy serves to "program" behavioral responses to stress in the offspring by altering the development of the neural systems that mediate fearfulness.

The neurophysiology of unmyelinated tactile afferents.

Håkan Olausson,  Johan Wessberg,  India Morrison … (2010)
CT (C tactile) afferents are a distinct type of unmyelinated, low-threshold mechanoreceptive units existing in the hairy but not glabrous skin of humans and other mammals. Evidence from patients lacking myelinated tactile afferents indicates that signaling in these fibers activate the insular cortex. Since this system is poor in encoding discriminative aspects of touch, but well-suited to encoding slow, gentle touch, CT fibers in hairy skin may be part of a system for processing pleasant and socially relevant aspects of touch. CT fiber activation may also have a role in pain inhibition. This review outlines the growing evidence for unique properties and pathways of CT afferents.