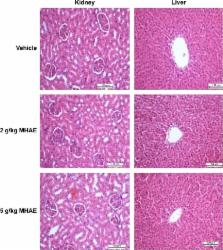 Monolluma quadrangula (Forssk.) Plowes is used in Saudi traditional medicines to treat gastric ulcers. The hydroalcoholic extract of M. quadrangula (MHAE) was used in an in vivo model to investigate its gastroprotective effects against ethanol-induced acute gastric lesions in rats. Five groups of Sprague Dawley rats were used. The first group was treated with 10% Tween 20 as a control. The other four groups included rats treated with absolute ethanol (5 mL/kg) to induce an ulcer, rats treated with 20 mg/kg omeprazole as a reference drug, and rats treated with 150 or 300 mg/kg MHAE. One hour later, the rats were administered absolute ethanol (5 mL/kg) orally. Animals fed with MHAE exhibited a significantly increased pH, gastric wall mucus, and flattening of the gastric mucosa, as well as a decreased area of gastric mucosal damage. Histology confirmed the results; extensive destruction of the gastric mucosa was observed in the ulcer control group, and the lesions penetrated deep into the gastric mucosa with leukocyte infiltration of the submucosal layer and edema. However, gastric protection was observed in the rats pre-fed with plant extracts. Periodic acid–Schiff staining of the gastric wall revealed a remarkably intensive uptake of magenta color in the experimental rats pretreated with MHAE compared to the ulcer control group. Immunohistochemistry staining revealed an upregulation of the Hsp70 protein and a downregulation of the Bax protein in rats pretreated with MHAE compared with the control rats. Gastric homogenate showed significantly increased catalase and superoxide dismutase, and the level of malondialdehyde (MDA) was reduced in the rats pretreated with MHAE compared to the control group. In conclusion, MHAE exhibited a gastroprotective effect against ethanol-induced gastric mucosal injury in rats. The mechanism of this gastroprotection included an increase in pH and gastric wall mucus, an increase in endogenous enzymes, and a decrease in the level of MDA. Furthermore, protection was given through the upregulation of Hsp70 and the downregulation of Bax proteins.

Determination of serum proteins by means of the biuret reaction.

Wen-Xue Li,  Lars Weidolf,  M. Ahlström … (2004)
The human clearance of proton pump inhibitors (PPIs) of the substituted benzimidazole class is conducted primarily by the hepatic cytochrome P450 (P450) system. To compare the potency and specificity of the currently used PPIs (i.e., omeprazole, esomeprazole, lansoprazole, pantoprazole, and rabeprazole) as inhibitors of four cytochrome P450 enzymes (CYP2C9, 2C19, 2D6, and 3A4), we performed in vitro studies using human liver microsomal preparations and recombinant CYP2C19. Sample analysis was done using selected reaction monitoring liquid chromatography/tandem mass spectometry. With several systems for CYP2C19 activity (two marker reactions, S-mephenytoin 4'-hydroxylation and R-omeprazole 5-hydroxylation, tested in either human liver microsomes or recombinant CYP2C19), the five PPIs showed competitive inhibition of CYP2C19 activity with K(i) of 0.4 to 1.5 microM for lansoprazole, 2 to 6 microM for omeprazole, approximately 8 microM for esomeprazole, 14 to 69 microM for pantoprazole, and 17 to 21 microM for rabeprazole. Pantoprazole was a competitive inhibitor of both CYP2C9-catalyzed diclofenac 4'-hydroxylation and CYP3A4-catalyzed midazolam 1'-hydroxylation (K(i) of 6 and 22 microM, respectively), which were at least 2 times more potent than the other PPIs. All PPIs were poor inhibitors of CYP2D6-mediated bufuralol 1'-hydroxylation with IC(50) > 200 microM. The inhibitory potency of a nonenzymatically formed product of rabeprazole, rabeprazole thioether, was also investigated and showed potent, competitive inhibition with K(i) values of 6 microM for CYP2C9, 2 to 8 microM for CYP2C19, 12 microM for CYP2D6, and 15 microM for CYP3A4. The inhibitory potency of R-omeprazole on the four studied P450 enzymes was also studied and showed higher inhibitory potency than its S-isomer on CYP2C9 and 2C19 activities. Our data suggest that, although the inhibitory profiles of the five studied PPIs were similar, lansoprazole and pantoprazole are the most potent in vitro inhibitors of CYP2C19 and CYP2C9, respectively. Esomeprazole showed less inhibitory potency compared with omeprazole and its R-enantiomer. The inhibitory potency of rabeprazole was relatively lower than the other PPIs, but its thioether analog showed potent inhibition on the P450 enzymes investigated, which may be clinically significant.

Piotr Wardas,  Maria Wardas,  Elzbieta Niedworok … (2003)
Free radicals generate the lipid peroxidation process in an organism. Malondialdehyde (MDA) is one of the final products of polyunsaturated fatty acids peroxidation in the cells. An increase in free radicals causes overproduction of MDA. Malondialdehyde level is commonly known as a marker of oxidative stress and the antioxidant status in cancerous patients.