Correlation of neuter status and expression of heritable disorders 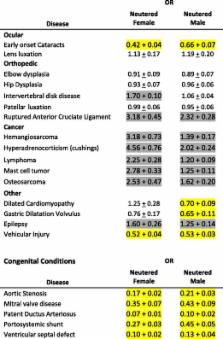 Gonadectomy, or neutering, is a very common surgery for dogs having many positive effects on behavior, health, and longevity. There are also certain risks associated with neutering including the development of orthopedic conditions, cognitive decline, and a predisposition to some neoplasias. This study was designed specifically to identify if a correlation exists between neuter status and inherited conditions in a large aggregate cohort of dogs representing many different breeds.

Neutered dogs were at less risk for early and congenital conditions (aortic stenosis, early onset cataracts, mitral valve disease, patent ductus arteriosus, portosystemic shunt, and ventricular septal defect) than intact dogs. Neutering was also associated with reduced risk of dilated cardiomyopathy and gastric dilatation volvulus in males. Neutering was significantly associated with an increased risk for males and females for cancers (hemangiosarcoma, hyperadrenocorticism, lymphoma, mast cell tumor, and osteosarcoma), ruptured anterior cruciate ligament and epilepsy. Intervertebral disk disease was associated with increased risk in females only. For elbow dysplasia, hip dysplasia, lens luxation, and patellar luxation neutering had no significant effect on the risk for those conditions. Neutering was associated with a reduced risk of vehicular injury, a condition chosen as a control.

In this retrospective study, several conditions showed an increased risk associated with neutering whereas other conditions were less likely to be expressed in neutered dogs. The complexity of the interactions between neutering and inherited conditions underscores the need for reflective consultation between the client and the clinician when considering neutering. The convenience and advantages of neutering dogs that will not be included in a breeding program must be weighed against possible risk associated with neutering.

Prevalence of obesity in dogs examined by Australian veterinary practices and the risk factors involved.

M Pride,  Jeffrey B. Jones,  T Grassi … (2005)
A study was undertaken to determine the prevalence of obesity in dogs examined by veterinary practices across Australia, and to determine the risk factors involved; 1700 practices were asked to complete a veterinarian opinion survey, and of the 428 practices that responded, 178 were selected to complete an RSPCA Australia Pet Obesity Questionnaire, together with additional practices selected by Australian State and Territory RSPCA societies. This questionnaire was sent to a total of 209 practices which were asked to record details of eligible dogs, and the reason why they had been examined during the previous month. Fifty-two (24.9 per cent) of the practices responded and provided data on 2661 dogs, of which 892 (33.5 per cent) were overweight and 201 (7.6 per cent) were obese. A further 112 dogs (4.2 per cent) were classified as thin or very thin, but these were excluded from subsequent analyses. Of the remaining 2549 dogs, approximately half were female and 1905 (74.7 per cent) were neutered. The dogs' weight category was influenced by several factors. Breed influenced the importance of sex and neutering as risk factors. The prevalence of overweight and obese dogs combined was 41 per cent; the prevalence increased with age up to about 10 years old, and then declined. Rural and semirural dogs were more at risk of obesity than urban and suburban dogs.