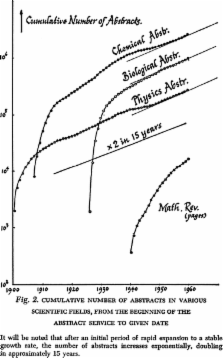 The growth rate of scientific publication has been studied from 1907 to 2007 using available data from a number of literature databases, including Science Citation Index (SCI) and Social Sciences Citation Index (SSCI). Traditional scientific publishing, that is publication in peer-reviewed journals, is still increasing although there are big differences between fields. There are no indications that the growth rate has decreased in the last 50 years. At the same time publication using new channels, for example conference proceedings, open archives and home pages, is growing fast. The growth rate for SCI up to 2007 is smaller than for comparable databases. This means that SCI was covering a decreasing part of the traditional scientific literature. There are also clear indications that the coverage by SCI is especially low in some of the scientific areas with the highest growth rate, including computer science and engineering sciences. The role of conference proceedings, open access archives and publications published on the net is increasing, especially in scientific fields with high growth rates, but this has only partially been reflected in the databases. The new publication channels challenge the use of the big databases in measurements of scientific productivity or output and of the growth rate of science. Because of the declining coverage and this challenge it is problematic that SCI has been used and is used as the dominant source for science indicators based on publication and citation numbers. The limited data available for social sciences show that the growth rate in SSCI was remarkably low and indicate that the coverage by SSCI was declining over time. National Science Indicators from Thomson Reuters is based solely on SCI, SSCI and Arts and Humanities Citation Index (AHCI). Therefore the declining coverage of the citation databases problematizes the use of this source.

The Matthew Effect in Science: The reward and communication systems of science are considered.

R K Merton (1968)
This account of the Matthew effect is another small exercise in the psychosociological analysis of the workings of science as a social institution. The initial problem is transformed by a shift in theoretical perspective. As originally identified, the Matthew effect was construed in terms of enhancement of the position of already eminent scientists who are given disproportionate credit in cases of collaboration or of independent multiple discoveries. Its significance was thus confined to its implications for the reward system of science. By shifting the angle of vision, we note other possible kinds of consequences, this time for the communication system of science. The Matthew effect may serve to heighten the visibility of contributions to science by scientists of acknowledged standing and to reduce the visibility of contributions by authors who are less well known. We examine the psychosocial conditions and mechanisms underlying this effect and find a correlation between the redundancy function of multiple discoveries and the focalizing function of eminent men of science-a function which is reinforced by the great value these men place upon finding basic problems and by their self-assurance. This self-assurance, which is partly inherent, partly the result of experiences and associations in creative scientific environments, and partly a result of later social validation of their position, encourages them to search out risky but important problems and to highlight the results of their inquiry. A macrosocial version of the Matthew principle is apparently involved in those processes of social selection that currently lead to the concentration of scientific resources and talent (50).

Citation Analysis as a Tool in Journal Evaluation: Journals can be ranked by frequency and impact of citations for science policy studies

Impact of data sources on citation counts and rankings of LIS faculty: Web of science versus scopus and google scholar