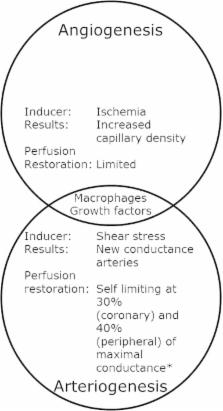 The extent of neovascularization determines the clinical outcome of coronary artery disease and other occlusive cardiovascular disorders. Monitoring of neovascularization is therefore highly important. This review article will elaborately discuss preclinical studies aimed at validating new nuclear angiogenesis and arteriogenesis tracers. Additionally, we will briefly address possible obstacles that should be considered when designing an arteriogenesis radiotracer.

A structured medline search was the base of this review, which gives an overview on different radiopharmaceuticals that have been evaluated in preclinical models.

Neovascularization is a collective term used to indicate different processes such as angiogenesis and arteriogenesis. However, while it is assumed that sensitive detection through nuclear imaging will facilitate translation of successful therapeutic interventions in preclinical models to the bedside, we still lack specific tracers for neovascularization imaging. Most nuclear imaging research to date has focused on angiogenesis, leaving nuclear arteriogenesis imaging largely overlooked.

Although angiogenesis is the process which is best understood, there is no scarcity in theoretical targets for arteriogenesis imaging.

The splice variants of vascular endothelial growth factor (VEGF) and their receptors.

Jeffrey Stringer,  Philip C. Robinson (2001)
Vascular endothelial growth factor (VEGF) is a secreted mitogen highly specific for cultured endothelial cells. In vivo VEGF induces microvascular permeability and plays a central role in both angiogenesis and vasculogenesis. VEGF is a promising target for therapeutic intervention in certain pathological conditions that are angiogenesis dependent, most notably the neovascularisation of growing tumours. Through alternative mRNA splicing, a single gene gives rise to several distinct isoforms of VEGF, which differ in their expression patterns as well as their biochemical and biological properties. Two VEGF receptor tyrosine kinases (VEGFRs) have been identified, VEGFR-1 (Flt-1) and VEGFR-2 (KDR/Flk-1). VEGFR-2 seems to mediate almost all observed endothelial cell responses to VEGF, whereas roles for VEGFR-1 are more elusive. VEGFR-1 might act predominantly as a ligand-binding molecule, sequestering VEGF from VEGFR-2 signalling. Several isoform-specific VEGF receptors exist that modulate VEGF activity. Neuropilin-1 acts as a co-receptor for VEGF(165), enhancing its binding to VEGFR-2 and its bioactivity. Heparan sulphate proteoglycans (HSPGs), as well as binding certain VEGF isoforms, interact with both VEGFR-1 and VEGFR-2. HSPGs have a wide variety of functions, such as the ability to partially restore lost function to damaged VEGF(165) and thereby prolonging its biological activity.

Aminopeptidase N is a receptor for tumor-homing peptides and a target for inhibiting angiogenesis.

R Pasqualini,  W Arap,  R Ashmun … (2000)
Phage that display a surface peptide with the NGR sequence motif home selectively to tumor vasculature in vivo. A drug coupled to an NGR peptide has more potent antitumor effects than the free drug [W. Arap et al., Science (Washington DC), 279: 377-380, 1998]. We show here that the receptor for the NGR peptides in tumor vasculature is aminopeptidase N (APN; also called CD13). NGR phage specifically bound to immunocaptured APN and to cells engineered to express APN on their surface. Antibodies against APN inhibited in vivo tumor homing by the NGR phage. Immunohistochemical staining showed that APN expression is up-regulated in endothelial cells within mouse and human tumors. In another tissue that undergoes angiogenesis, corpus luteum, blood vessels also expressed APN, but APN was not detected in blood vessels of various other normal tissues stained under the same conditions. APN antagonists specifically inhibited angiogenesis in chorioallantoic membranes and in the retina and suppressed tumor growth. Thus, APN is involved in angiogenesis and can serve as a target for delivering drugs into tumors and for inhibiting angiogenesis.

Monocyte activation in angiogenesis and collateral growth in the rabbit hindlimb.

Jutta Schaper,  D Scholz,  Jana Winkler … (1998)
We have previously shown that monocytes adhere to the vascular wall during collateral vessel growth (arteriogenesis) and capillary sprouting (angiogenesis). In this study we investigated the association of monocyte accumulation with both the production of the cytokines-basic fibroblast growth factor (bFGF) and TNF-alpha-and vessel proliferation in the rabbit after femoral artery occlusion. In particular, we studied the effects of an increase in monocyte recruitment by LPS on capillary density as well as collateral and peripheral conductance after 7 d of occlusion. Monocytes accumulated around day 3 in collateral arteries when maximal proliferation was observed, and stained strongly for bFGF and TNF-alpha. In the lower limb where angiogenesis was shown to be predominant, macrophage accumulation was also closely associated with maximal proliferation (around day 7). LPS treatment significantly increased capillary density (424+/-26.1 n/mm2 vs. 312+/-20.7 n/mm2; P < 0.05) and peripheral conductance (109+/-33.8 ml/min/100 mmHg vs. 45+/-6.8 ml/min/100 mmHg; P < 0.05) as compared with untreated animals after 7 d of occlusion. These results indicate that monocyte activation plays a major role in angiogenesis and collateral artery growth.