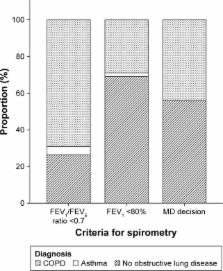 In primary care, individuals at high risk of COPD (ie, age ≥35 years, relevant exposure, and at least one respiratory symptom) and no previous diagnosis of obstructive lung disease were examined with a COPD-6 screening device. In prioritized order, the criteria for proceeding to confirmatory spirometry were FEV 1/FEV 6 <0.7, FEV 1 <80%pred, or clinical suspicion of COPD regardless of test result (medical doctor’s [MD] decision). Based on spirometry, including bronchodilator (BD) reversibility test, individuals were classified as COPD (post-BD FEV 1/FVC <0.70), asthma (ΔFEV 1 ≥0.50 L), or no obstructive lung disease.

Prescreening with the COPD-6 device showed acceptable specificity for the selection of subjects for diagnostic spirometry and is likely to be a useful alternative to current practice in primary care.

Àlvar Agustí,  Per S. Bakke,  E Silverman … (2012)
Bronchodilator responsiveness is a potential phenotypic characteristic of chronic obstructive pulmonary disease (COPD). We studied whether change in lung function after a bronchodilator is abnormal in COPD, whether stable responder subgroups can be identified, and whether these subgroups experience different clinical outcomes. 1831 patients with COPD, 285 smoking (SC) and 228 non-smoking (NSC) controls from the Evaluation of COPD Longitudinally to Identify Predictive Surrogate Endpoints (ECLIPSE) cohort. Spirometric reversibility to 400 μg inhaled salbutamol was assessed on four occasions over 1 year. Forced expiratory volume in 1 s (FEV(1)) increase after salbutamol was similar in SC (mean 0.14 litres (SD 0.15)) and COPD (0.12 litres (0.15)) and was significantly greater than NSC (0.08 litres (0.14)). Reversibility status varied with repeated testing in parallel with the day-to-day variation in pre-bronchodilator FEV(1), which was similar in control subjects and patients with COPD. Absolute FEV(1) change decreased by Global initiative for chronic Obstructive Lung Disease (GOLD) stage in patients with COPD (GOLD II, mean 0.16 litres (SD 0.17); III, 0.10 litres (0.13); IV, 0.05 litres (0.08) as did chances of being classified as reversible. CT-defined emphysema was weakly related to the absolute change in FEV(1) post salbutamol. Consistently reversible patients (n=227) did not differ in mortality, hospitalisation or exacerbation experience from irreversible patients when allowing for differences in baseline FEV(1). Reversibility only assessed with salbutamol and defined by FEV(1) criteria. The COPD population was older than the control populations. Post-salbutamol FEV(1) change is similar in patients with COPD and smoking controls but is influenced by baseline lung function and the presence of emphysema. Bronchodilator reversibility status varies temporally and does not distinguish clinically relevant outcomes, making it an unreliable phenotype.

Spirometry utilization for COPD: how do we measure up?

MeiLan K Han,  Min Kim,  Russell Mardon … (2007)
COPD is a significant cause of morbidity and mortality. Guidelines recommend the confirmation of a COPD diagnosis with spirometry. Limited evidence exists, however, documenting the frequency of spirometry use in clinical practice. The National Committee for Quality Assurance recruited five health plans to determine the proportion of patients >/= 40 years old with a new diagnosis of COPD who had received spirometry during the interval starting 720 days prior to diagnosis and ending 180 days after diagnosis. Patients were identified via International Classification of Diseases, Ninth Revision diagnostic codes for encounters during the period July 1, 2002, through June 30, 2003. For each patient, the participating plans provided patient demographic and claims data from administrative data systems. Participating health plans covered 1,597,749 members with a total of 5,039 eligible COPD patients identified. Patients in the 40 to 64 age range had the highest percentage of new COPD diagnoses. Women were also slightly more likely to undergo spirometry (33.5% vs 29.4%, p = 0.001). Approximately 32% of patients with a new diagnosis of COPD had undergone spirometry in the specified interval. Spirometry frequency was lowest in older patients, with the lowest frequency in those >/= 75 years old. Our study suggests that approximately 32% of a broad range of patients with a new COPD diagnosis had undergone spirometry within the previous 2 years to 6 months following diagnosis. In addition, spirometric testing appeared to decrease with increasing age. As opposed to a prior report, women were not less likely to have undergone spirometry. This study shows that spirometry is infrequently used in clinical practice for diagnosis of COPD and suggests opportunities for practice improvement.

Jan Degryse,  Jan Heyrman,  J Buffels … (2004)
To determine if spirometry is essential for the early detection of COPD in general practice, compared to the screening value of a short questionnaire. A prospective survey of the population aged 35 to 70 years visiting their general practitioner (GP) during a 12-week period, using a questionnaire on symptoms of obstructive lung disease (OLD). Spirometry was performed in all participants with positive answers and in a 10% random sample from the group without complaints. Twenty GPs were provided with a hand-held spirometer, and received training in performance and interpretation of lung function tests. All 35- to 70-year-old patients (n = 3,408) were screened for current use of bronchodilators. The subgroup receiving bronchodilators (n = 250, 7%) was assumed to have OLD, and was excluded. Airflow obstruction was defined according to the European Respiratory Society standards. The positive predictive power of the questionnaire was low (sensitivity, 58%; specificity, 78%; likelihood ratio, 2.6). One hundred twenty-six cases of formerly unknown OLD were detected in the group of patients with complaints, vs an extrapolated number of 90 in the group without complaints. Despite a negative predictive value of 95% for the questionnaire used, 42% of the newly diagnosed cases of OLD would not have been detected without spirometry. The use of a spirometer is mandatory if early stages of OLD are to be detected in general practice. Screening for airflow obstruction almost doubles the number of known patients with OLD.