The moonlighting function of bacteriophage P4 capsid protein, Psu, as a transcription antiterminator 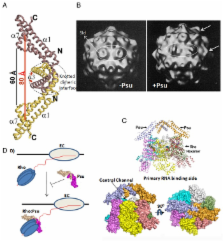 Psu, a 20-kD bacteriophage P4 capsid decorating protein moonlights as a transcription antiterminator of the Rho-dependent termination. Psu forms specific complex with E.coli Rho protein, and affects the latter's ATP-dependent translocase activity along the nascent RNA. It forms a unique knotted dimer to take a V-shaped structure. The C-terminal helix of Psu makes specific contacts with a disordered region of Rho, encompassing the residues 139–153. An energy minimized structural model of the Rho–Psu complex reveals that the V-shaped Psu dimer forms a lid over the central channel of the Rho hexamer. This configuration of Psu causes a mechanical impediment to the translocase activity of Rho. The knowledge of structural and mechanistic basis of inhibition of Rho action by Psu may help to design peptide inhibitors for the conserved Rho-dependent transcription termination process of bacteria.

Running in reverse: the structural basis for translocation polarity in hexameric helicases.

N Thomsen,  Stefan Berger (2009)
Hexameric helicases couple ATP hydrolysis to processive separation of nucleic acid duplexes, a process critical for gene expression, DNA replication, and repair. All hexameric helicases fall into two families with opposing translocation polarities: the 3'-->5' AAA+ and 5'-->3' RecA-like enzymes. To understand how a RecA-like hexameric helicase engages and translocates along substrate, we determined the structure of the E. coli Rho transcription termination factor bound to RNA and nucleotide. Interior nucleic acid-binding elements spiral around six bases of RNA in a manner unexpectedly reminiscent of an AAA+ helicase, the papillomavirus E1 protein. Four distinct ATP-binding states, representing potential catalytic intermediates, are coupled to RNA positioning through a complex allosteric network. Comparative studies with E1 suggest that RecA and AAA+ hexameric helicases use different portions of their chemomechanical cycle for translocating nucleic acid and track in opposite directions by reversing the firing order of ATPase sites around the hexameric ring. For a video summary of this article, see the PaperFlick file with the Supplemental Data available online.

Jason M Peters,  Abbey Vangeloff,  Robert Landick (2011)
The process of transcription termination is essential to proper expression of bacterial genes and, in many cases, to the regulation of bacterial gene expression. Two types of bacterial transcriptional terminators are known to control gene expression. Intrinsic terminators dissociate transcription complexes without the assistance of auxiliary factors. Rho-dependent terminators are sites of dissociation mediated by an RNA helicase called Rho. Despite decades of study, the molecular mechanisms of both intrinsic and Rho-dependent termination remain uncertain in key details. Most knowledge is based on the study of a small number of model terminators. The extent of sequence diversity among functional terminators and the extent of mechanistic variation as a function of sequence diversity are largely unknown. In this review, we consider the current state of knowledge about bacterial termination mechanisms and the relationship between terminator sequence and steps in the termination mechanism. Published by Elsevier Ltd.

M Peters,  Michael Rowland,  Robert Landick … (2009)
The trafficking patterns of the bacterial regulators of transcript elongation sigma(70), rho, NusA, and NusG on genes in vivo and the explanation for promoter-proximal peaks of RNA polymerase (RNAP) are unknown. Genome-wide, E. coli ChIP-chip revealed distinct association patterns of regulators as RNAP transcribes away from promoters (rho first, then NusA, then NusG). However, the interactions of elongating complexes with these regulators did not differ significantly among most transcription units. A modest variation of NusG signal among genes reflected increased NusG interaction as transcription progresses, rather than functional specialization of elongating complexes. Promoter-proximal RNAP peaks were offset from sigma(70) peaks in the direction of transcription and co-occurred with NusA and rho peaks, suggesting that the RNAP peaks reflected elongating, rather than initiating, complexes. However, inhibition of rho did not increase RNAP levels within genes downstream from the RNAP peaks, suggesting the peaks are caused by a mechanism other than rho-dependent attenuation.