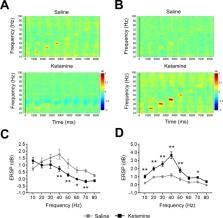 The auditory steady-state response (ASSR) has been used to detect auditory processing deficits in patients with psychiatric disorders. However, the methodology of ASSR recording from the brain surface has not been standardized in preclinical studies, limiting its use as a translational biomarker. The sites of maximal ASSR in humans are the vertex and/or middle frontal area, although it has been suggested that the auditory cortex is the source of the ASSR. We constructed and validated novel methods for ASSR recording using a switchable pedestal which allows ASSR recording alternatively from temporal or parietal cortex with a wide range of frequencies in freely moving rats. We further evaluated ASSR as a translational tool by assessing the effect of ketamine. The ASSR measured at parietal cortex did not show clear event-related spectral perturbation (ERSP) or inter-trial coherence (ITC) in any frequency bands or a change with ketamine. In contrast, the ASSR at temporal cortex showed clear ERSP and ITC where 40 Hz was maximal in both gamma-band frequencies. Ketamine exerted a biphasic effect in ERSP at gamma bands. These findings suggest that temporal cortex recording with a wide frequency range is a robust methodology to detect ASSR, potentially enabling application as a translational biomarker in psychiatric and developmental disorders.

Gene expression deficits in a subclass of GABA neurons in the prefrontal cortex of subjects with schizophrenia.

Takanori Hashimoto,  David W Volk,  Stephen Eggan … (2003)
Markers of inhibitory neurotransmission are altered in the prefrontal cortex (PFC) of subjects with schizophrenia, and several lines of evidence suggest that these alterations may be most prominent in the subset of GABA-containing neurons that express the calcium-binding protein, parvalbumin (PV). To test this hypothesis, we evaluated the expression of mRNAs for PV, another calcium-binding protein, calretinin (CR), and glutamic acid decarboxylase (GAD67) in postmortem brain specimens from 15 pairs of subjects with schizophrenia and matched control subjects using single- and dual-label in situ hybridization. Signal intensity for PV mRNA expression in PFC area 9 was significantly decreased in the subjects with schizophrenia, predominantly in layers III and IV. Analysis at the cellular level revealed that this decrease was attributable principally to a reduction in PV mRNA expression per neuron rather than by a decreased density of PV mRNA-positive neurons. In contrast, the same measures of CR mRNA expression were not altered in schizophrenia. These findings were confirmed by findings from cDNA microarray studies using different probes. Across the subjects with schizophrenia, the decrease in neuronal PV mRNA expression was highly associated (r = 0.84) with the decrease in the density of neurons containing detectable levels of GAD67 mRNA. Furthermore, simultaneous detection of PV and GAD67 mRNAs revealed that in subjects with schizophrenia only 55% of PV mRNA-positive neurons had detectable levels of GAD67 mRNA. Given the critical role that PV-containing GABA neurons appear to play in regulating the cognitive functions mediated by the PFC, the selective alterations in gene expression in these neurons may contribute to the cognitive deficits characteristic of schizophrenia.

Steven Spencer,  D Salisbury,  Martha Shenton … (2008)
In chronic schizophrenia and chronic bipolar disorder, gamma band (30-100 Hz) auditory steady-state electroencephalogram responses (ASSRs) are reduced in power and phase locking, likely reflecting neural circuit dysfunction. Here we examined whether gamma ASSR deficits are also present at first hospitalization for psychosis. Subjects were 16 first episode schizophrenia patients (SZ), 16 first episode affective disorder patients (AFF) (13 with bipolar disorder), and 33 healthy control subjects (HC). Stimuli were 20-, 30-, and 40-Hz binaural click trains. The ASSR phase locking and evoked power were analyzed with the Morlet wavelet transform. At 40-Hz stimulation, SZ and AFF had significantly reduced phase locking compared with HC. This deficit was more pronounced over the left hemisphere in SZ. Evoked power at 40 Hz was also reduced in the patients compared with HC. At 30-Hz stimulation phase locking and evoked power were reduced in both patient groups. The 20-Hz ASSR did not differ between groups, but phase locking and evoked power of the 40-Hz harmonic of the 20-Hz ASSR were reduced in both SZ and AFF. Phase locking of this 40-Hz harmonic was correlated with total positive symptoms in SZ. The gamma ASSR deficit is present at first hospitalization for both schizophrenia and affective disorder but shows a left hemisphere bias in first hospitalized SZ. Some of the neural circuitry abnormalities underlying the gamma ASSR deficit might be common to psychoses in general, whereas others might be specific to particular disorders.