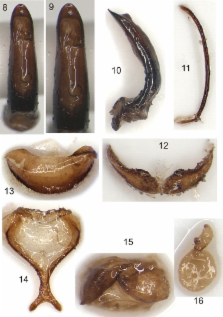 L Gültekin,  C Tronci,  M. G. Cristofaro … (2008)
We studied the life history, geographic distribution, behavior, and ecology of Larinus filiformis Petri (Coleoptera: Curculionidae) in its native range to determine whether it is worthy of further evaluation as a classical biological control agent of yellow starthistle, Centaurea solstitialis (Asteraceae: Cardueae). Larinus filiformis occurs in Armenia, Azerbaijan, Turkey, and Bulgaria and has been reared only from C. solstitialis. At field sites in central and eastern Turkey, adults were well synchronized with the plant, being active from mid-May to late July and ovipositing in capitula (flowerheads) of C. solstitialis from mid-June to mid-July. Larvae destroy all the seeds in a capitulum. The insect is univoltine in Turkey, and adults hibernate from mid-September to mid-May. In the spring, before adults begin ovipositing, they feed on the immature flower buds of C. solstitialis, causing them to die. The weevil destroyed 25-75% of capitula at natural field sites, depending on the sample date. Preliminary host specificity experiments on adult feeding indicate that the weevil seems to be restricted to a relatively small number of plants within the Cardueae. Approximately 57% of larvae or pupae collected late in the summer were parasitized by hymenopterans [Bracon urinator, B. tshitsherini (Braconidae) and Exeristes roborator (Ichneumonidae), Aprostocetus sp. (Eulophidae), and unidentified species of Eurytomidae and Ormyridae]. This weevil may be a better choice than the other capitula insects already established in the United States, particularly in colder parts of the plant's range.

This is an open access article distributed under the terms of the Creative Commons Attribution License 3.0 (CC-BY), which permits unrestricted use, distribution, and reproduction in any medium, provided the original author and source are credited.