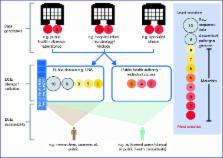 Pathogen genomics has the potential to transform the clinical and public health management of infectious diseases through improved diagnosis, detection and tracking of antimicrobial resistance and outbreak control. However, the wide-ranging benefits of this technology can only fully be realized through the timely collation, integration and sharing of genomic and clinical/epidemiological metadata by all those involved in the delivery of genomic-informed services. As part of our review on bringing pathogen genomics into ‘health-service’ practice, we undertook extensive stakeholder consultation to examine the factors integral to achieving effective data sharing and integration. Infrastructure tailored to the needs of clinical users, as well as practical support and policies to facilitate the timely and responsible sharing of data with relevant health authorities and beyond, are all essential. We propose a tiered data sharing and integration model to maximize the immediate and longer term utility of microbial genomics in healthcare. Realizing this model at the scale and sophistication necessary to support national and international infection management services is not uncomplicated. Yet the establishment of a clear data strategy is paramount if failures in containing disease spread due to inadequate knowledge sharing are to be averted, and substantial progress made in tackling the dangers posed by infectious diseases.

Rapid whole-genome sequencing for investigation of a neonatal MRSA outbreak.

Claudio Köser,  Matthew T.G. Holden,  Matthew Ellington … (2012)
Isolates of methicillin-resistant Staphylococcus aureus (MRSA) belonging to a single lineage are often indistinguishable by means of current typing techniques. Whole-genome sequencing may provide improved resolution to define transmission pathways and characterize outbreaks. We investigated a putative MRSA outbreak in a neonatal intensive care unit. By using rapid high-throughput sequencing technology with a clinically relevant turnaround time, we retrospectively sequenced the DNA from seven isolates associated with the outbreak and another seven MRSA isolates associated with carriage of MRSA or bacteremia in the same hospital. We constructed a phylogenetic tree by comparing single-nucleotide polymorphisms (SNPs) in the core genome to a reference genome (an epidemic MRSA clone, EMRSA-15 [sequence type 22]). This revealed a distinct cluster of outbreak isolates and clear separation between these and the nonoutbreak isolates. A previously missed transmission event was detected between two patients with bacteremia who were not part of the outbreak. We created an artificial "resistome" of antibiotic-resistance genes and demonstrated concordance between it and the results of phenotypic susceptibility testing; we also created a "toxome" consisting of toxin genes. One outbreak isolate had a hypermutator phenotype with a higher number of SNPs than the other outbreak isolates, highlighting the difficulty of imposing a simple threshold for the number of SNPs between isolates to decide whether they are part of a recent transmission chain. Whole-genome sequencing can provide clinically relevant data within a time frame that can influence patient care. The need for automated data interpretation and the provision of clinically meaningful reports represent hurdles to clinical implementation. (Funded by the U.K. Clinical Research Collaboration Translational Infection Research Initiative and others.).

Holger Rohde,  Junjie Qin,  Yujun Cui … (2011)
An outbreak caused by Shiga-toxin–producing Escherichia coli O104:H4 occurred in Germany in May and June of 2011, with more than 3000 persons infected. Here, we report a cluster of cases associated with a single family and describe an open-source genomic analysis of an isolate from one member of the family. This analysis involved the use of rapid, bench-top DNA sequencing technology, open-source data release, and prompt crowd-sourced analyses. In less than a week, these studies revealed that the outbreak strain belonged to an enteroaggregative E. coli lineage that had acquired genes for Shiga toxin 2 and for antibiotic resistance.

Will Ebola change the game? Ten essential reforms before the next pandemic. The report of the Harvard-LSHTM Independent Panel on the Global Response to Ebola

We confirm all supporting data, code and protocols have been provided within the article or through supplementary data files.

This is an Open Access article distributed under the terms of the Creative Commons Attribution License ( http://creativecommons.org/licenses/by/3.0/).