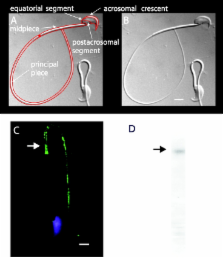 The spermatozoon is specialized for a single vital role in fertilization. Past studies show that Ca 2+ signals produced by the opening of plasma membrane entry channels initiate several events required for the sperm to reach and enter the egg but reveal little about how resting [Ca 2+] i is maintained or restored after elevation. We examined these homeostatic mechanisms by monitoring the kinetics of recovery from depolarizing stimuli under conditions intended to inhibit candidate mechanisms for sequestration or extrusion of Ca 2+ from the cytosol. We found that the Ca 2+-ATPase pump of the plasma membrane performs the major task of Ca 2+ clearance. It is essential in the final stages of recovery to achieve a low resting [Ca 2+] i. With immunomethods we found a ∼130-kD plasma membrane Ca 2+-ATPase protein on Western blots of whole sperm extracts and showed immunolocalization to the proximal principal piece of the flagellum. The plasma membrane Na +-Ca 2+ exchanger also exports Ca 2+ when [Ca 2+] i is elevated. Simultaneous inhibition of both mechanisms of extrusion revealed an additional contribution to clearance from a CCCP-sensitive component, presumably sequestration by the mitochondria. Involvement of SERCA pumps was not clearly detected. Many aspects of the kinetics of Ca 2+ clearance observed in the presence and absence of inhibitors were reproduced in a mathematical model based on known and assumed kinetic parameters. The model predicts that when cytosolic [Ca 2+] is at 1 μM, the rates of removal by the Ca 2+-ATPase, Na +-Ca 2+-exchanger, mitochondrial uniporter, and SERCA pump are ∼1.0, 0.35, 0.33, and 0 μmole l −1 s −1, rates substantially slower than those reported for other cells studied by similar methods. According to the model, the Na +-Ca 2+ exchanger is poised so that it may run in reverse at resting [Ca 2+] i levels. We conclude that the essential functions of sperm do not require the ability to recover rapidly from globally elevated cytosolic [Ca 2+].

Capacitation of mouse spermatozoa. I. Correlation between the capacitation state and protein tyrosine phosphorylation.

Geromy G. Moore,  D Pan,  Brett Olds … (1995)
The molecular basis of mammalian sperm capacitation, defined functionally as those processes that confer on the sperm the acquisition of fertilization-competence either in vivo in the female reproductive tract or in vitro, is poorly understood. We demonstrate here that capacitation of caudal epididymal mouse sperm in vitro is accompanied by a time-dependent increase in the protein tyrosine phosphorylation of a subset of proteins of M(r) 40,000-120,000. Incubation of sperm in media devoid of bovine serum albumin, CaCl2 or NaHCO3, components which individually are required for capacitation, prevent the sperm from undergoing capacitation as assessed by the ability of the cells to acquire the pattern B chlortetracycline fluorescence, to undergo the zona pellucida-induced acrosome reaction and, in some cases, to fertilize metaphase II-arrested eggs in vitro. In each of these cases the protein tyrosine phosphorylation of the subset of capacitation-associated proteins does not occur. Protein tyrosine phosphorylation of these particular proteins, as well as sperm capacitation, can be recovered in media devoid of each of these three constituents (bovine serum albumin, CaCl2 or NaHCO3) by adding back the appropriate component in a concentration-dependent manner. The requirement of NaHCO3 for these phosphorylations is not due to an alkalinization of intracellular sperm pH or to an increase in media pH. Caput epididymal sperm, which lack the ability to undergo capacitation in vitro, do not display this capacitation-dependent subset of tyrosine phosphorylated proteins in complete media even after extended incubation periods, and do not fertilize metaphase II-arrested eggs in vitro.(ABSTRACT TRUNCATED AT 250 WORDS)

G Augustine,  E Neher (1992)
1. Digital imaging and photometry were used in conjunction with the fluorescent Ca2+ indicator, Fura-2, to examine intracellular Ca2+ signals produced by depolarization of single adrenal chromaffin cells. 2. Depolarization with a patch pipette produced radial gradients of Ca2+ within the cell, with Ca2+ concentration highest in the vicinity of the plasma membrane. These gradients dissipated within a few hundred milliseconds when the voltage-gated Ca2+ channels were closed. 3. Dialysis of Fura-2 into the chromaffin cell caused concentration-dependent changes in the depolarization-induced Ca2+ signal, decreasing its magnitude and slowing its recovery time course. These changes were used to estimate the properties of the endogenous cytoplasmic Ca2+ buffer with which Fura-2 competes for Ca2+. 4. The spatially averaged Fura-2 signal was well described by a model assuming fast competition between Fura-2 and an endogenous buffer on a millisecond time scale. Retrieval of calcium by pumps and slow buffers occurs on a seconds-long time scale. No temporal changes indicative of buffers with intermediate kinetics could be detected. 5. Two independent estimates of the capacity of the fast endogenous Ca2+ buffer suggest that 98-99% of the Ca2+ entering the cell normally is taken up by this buffer. This buffer appears to be immobile, because it does not wash out of the cell during dialysis. It has a low affinity for Ca2+ ions, because it does not saturate with 1 microM-Ca2+ inside the cell. 6. The low capacity, affinity and mobility of the endogenous Ca2+ buffer makes it possible for relatively small amounts of exogenous Ca2+ buffers, such as Fura-2, to exert a significant influence on the characteristics of the Ca2+ concentration signal as measured by fluorescence ratios. On the other hand, even at moderate Fura-2 concentrations (0.4 mM) Fura-2 will dominate over the endogenous buffers. Under these conditions radiometric Ca2+ concentration signals are largely attenuated, but absolute fluorescence changes (at 390 nm) accurately reflect calcium fluxes.

Katherine D. Nicoll,  K Philipson (1999)
Plasma membrane Na(+)-Ca2+ exchange is an essential component of Ca2+ signaling pathways in several tissues. Activity is especially high in the heart where the exchanger is an important regulator of contractility. An expanding exchanger superfamily includes three mammalian Na(+)-Ca2+ exchanger genes and a number of alternative splicing products. New information indicates that the exchanger protein has nine transmembrane segments. The exchanger, which transports Na+ and Ca2+, is also regulated by these substrates. Some molecular information is available on regulation by Na+ and Ca2+ and by PIP2 and phosphorylation. Altered expression of the exchanger in pathophysiological states may contribute to various cardiac phenotypes. Use of transgenic approaches is beginning to improve our knowledge of exchanger function.