Traditional Medicine in the Pristine Village of Prokoško Lake on Vranica Mountain, Bosnia and Herzegovina 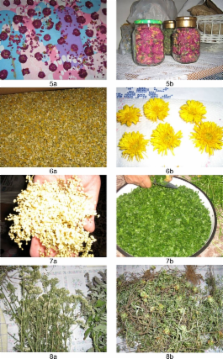 The results of an ethnobotanical study conducted in the pristine village of Prokoško Lake (Vranica Mountain, Bosnia and Herzegovina) in summer 2007 is presented. Informal interviews involving 12 informants known as “traditional healers” provided data from 43 plants used in 82 prescriptions. The applied plants were used for a broad spectrum of indications. The most frequent were gastro-intestinal tract ailments, blood system disorders, skin ailments, respiratory tract ailments and urinary-genital tract ailments. The most frequent preparation was an infusion. Other often used preparations were ointments or balms and decocts. The special Bosnian balms known as “mehlems” were prepared from freshly chopped or freshly pressed herbal parts of various plant species. Warmed resins from Abies or Picea species, raw cow or pig lard, olive oil and honey served as basis. The traditional doctors, who usually worked as a team, enjoyed such a good reputation that people from all over the country were visiting in search of alternative ways to cure their ailments and diseases. The practical techniques applied by the healers and some of their attitudes and values are reported.

The ecological aspect of ethnobotany and ethnopharmacology of population in Bosnia and Herzegovina.

Jasmina Redzic (2007)
This paper contains first systematical revision of the results on traditional use of wild medicinal and aromatic herbs on the territory of Bosnia and Herzegovina (B&H)--west of Balkan Peninsula; Southeast of Europe. There have been detected 227 plants belonging to 71 different plant families, which are being used with ethno therapeutic purpose. Results were obtained by method of open ethno botanical interview which comprised 150 persons, whose average age was 63. Medicinal plants in ethno therapy are being used either in fresh, raw or dried condition. Different herbal parts, depending on period of vegetation season, sometimes even in winter, are basis for preparation of infusions (59%), decoct (19%), tinctures (4%). Especially original are balms known as Bosnian "mehlems", which are fresh cuted herbal parts mixed with lukewarm resin, raw cow butter or honey. In ethno therapy are mostly being used aerial plant organs. Majority of herbs is being used for treatment of illnesses of respiratory (22%), gastrointestinal (19%) and urinary and genital system (9%), for treatment of skin conditions (11%), as well as for nervous system and heart diseases (16%). The most original plants on the field of ethno pharmacology, comparing with ethno therapy practice of other regions, are as follows: Ballota nigra, Aesculus hippocastanum, Calluna vulgaris, Centaurea cyanus, Euphrasia rostkoviana, Geranium robertianum, Gentiana asclepiadea, Helichrysum italicum, Lycopodium clavatum, Marrubium vulgare, Nepeta cataria, Populus tremula, Ruta graveolens, Tamus communis, Teucrium montanum, T. chamaedrys, and endemic plants Gentiana lutea subsp. symphyandra, Teucrium arduini, Micromeria thymifolia, Satureja montana, S. subspicata, Rhamnus fallax and Viola elegantula. There haven't been noticed significant differences in the frequencies of medicinal plants use among different ethnical groups. But, it has been perceived that longer ethno therapeutic tradition possess inhabitants of sub- and Mediterranean areas, as well as inhabitants of the mountain areas of B&H, regardless their ethnicity.

This is an Open Access article distributed under the terms of the Creative Commons Attribution License ( http://creativecommons.org/licenses/by/3.0/), which permits unrestricted use, distribution, and reproduction in any medium, provided the original work is properly cited.