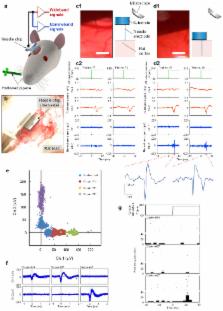 Very fine needle-electrode arrays potentially offer both low invasiveness and high spatial resolution of electrophysiological neuronal recordings in vivo. Herein we report the penetrating and recording capabilities of silicon-growth-based three-dimensional microscale-diameter needle-electrodes arrays. The fabricated needles exhibit a circular-cone shape with a 3-μm-diameter tip and a 210-μm length. Due to the microscale diameter, our silicon needles are more flexible than other microfabricated silicon needles with larger diameters. Coating the microscale-needle-tip with platinum black results in an impedance of ~600 kΩ in saline with output/input signal amplitude ratios of more than 90% at 40 Hz–10 kHz. The needles can penetrate into the whisker barrel area of a rat's cerebral cortex, and the action potentials recorded from some neurons exhibit peak-to-peak amplitudes of ~300 μV pp. These results demonstrate the feasibility of in vivo neuronal action potential recordings with a microscale needle-electrode array fabricated using silicon growth technology.

Vadim S Polikov,  Patrick Tresco,  W. Reichert (2005)
Chronically implanted recording electrode arrays linked to prosthetics have the potential to make positive impacts on patients suffering from full or partial paralysis. Such arrays are implanted into the patient's cortical tissue and record extracellular potentials from nearby neurons, allowing the information encoded by the neuronal discharges to control external devices. While such systems perform well during acute recordings, they often fail to function reliably in clinically relevant chronic settings. Available evidence suggests that a major failure mode of electrode arrays is the brain tissue reaction against these implants, making the biocompatibility of implanted electrodes a primary concern in device design. This review presents the biological components and time course of the acute and chronic tissue reaction in brain tissue, analyses the brain tissue response of current electrode systems, and comments on the various material science and bioactive strategies undertaken by electrode designers to enhance electrode performance.

Mijail Serruya,  Nicholas G. Hatsopoulos,  Liam Paninski … (2002)
The activity of motor cortex (MI) neurons conveys movement intent sufficiently well to be used as a control signal to operate artificial devices, but until now this has called for extensive training or has been confined to a limited movement repertoire. Here we show how activity from a few (7-30) MI neurons can be decoded into a signal that a monkey is able to use immediately to move a computer cursor to any new position in its workspace (14 degrees x 14 degrees visual angle). Our results, which are based on recordings made by an electrode array that is suitable for human use, indicate that neurally based control of movement may eventually be feasible in paralysed humans.

Intracellular features predicted by extracellular recordings in the hippocampus in vivo.

Z Borhegyi,  D Henze,  A Mamiya … (2000)
Multichannel tetrode array recording in awake behaving animals provides a powerful method to record the activity of large numbers of neurons. The power of this method could be extended if further information concerning the intracellular state of the neurons could be extracted from the extracellularly recorded signals. Toward this end, we have simultaneously recorded intracellular and extracellular signals from hippocampal CA1 pyramidal cells and interneurons in the anesthetized rat. We found that several intracellular parameters can be deduced from extracellular spike waveforms. The width of the intracellular action potential is defined precisely by distinct points on the extracellular spike. Amplitude changes of the intracellular action potential are reflected by changes in the amplitude of the initial negative phase of the extracellular spike, and these amplitude changes are dependent on the state of the network. In addition, intracellular recordings from dendrites with simultaneous extracellular recordings from the soma indicate that, on average, action potentials are initiated in the perisomatic region and propagate to the dendrites at 1.68 m/s. Finally we determined that a tetrode in hippocampal area CA1 theoretically should be able to record electrical signals from approximately 1, 000 neurons. Of these, 60-100 neurons should generate spikes of sufficient amplitude to be detectable from the noise and to allow for their separation using current spatial clustering methods. This theoretical maximum is in contrast to the approximately six units that are usually detected per tetrode. From this, we conclude that a large percentage of hippocampal CA1 pyramidal cells are silent in any given behavioral condition.