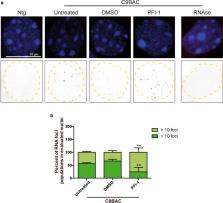 An intronic GGGGCC (G4C2) hexanucleotide repeat expansion (HRE) in the C9ORF72 gene is the most common cause of amyotrophic lateral sclerosis (ALS) and frontotemporal dementia (FTD), referred to as C9ALS/FTD. No cure or effective treatment exist for C9ALS/FTD. Three major molecular mechanisms have emerged to explain C9ALS/FTD disease mechanisms: (1) C9ORF72 loss-of-function through haploinsufficiency, (2) dipeptide repeat (DPR) proteins mediated toxicity by the translation of the repeat RNAs, and more controversial, (3) RNA-mediated toxicity by bidirectional transcription of the repeats that form intranuclear RNA foci. Recent studies indicate a double-hit pathogenic mechanism in C9ALS/FTD, where reduced C9ORF72 protein levels lead to impaired clearance of toxic DPRs. Here we explored whether pharmacological compounds can revert these pathological hallmarks in vitro and cognitive impairment in a C9ALS/FTD mouse model (C9BAC). We specifically focused our study on small molecule inhibitors targeting chromatin-regulating proteins (epidrugs) with the goal of increasing C9ORF72 gene expression and reduce toxic DPRs.

Our findings place BET bromodomain inhibitors as a potential therapy for C9ALS/FTD by ameliorating C9ORF72-associated pathological and behavioral abnormalities. Our finding that PFI-1 increases accumulation of intranuclear RNA foci is in agreement with recent data in flies suggesting that nuclear RNA foci can be neuroprotective by sequestering repeat transcripts that result in toxic DPRs.

Maksim Kunitski,  Nicolas Eicke,  Pia Huber … (2019)
Wave-particle duality is an inherent peculiarity of the quantum world. The double-slit experiment has been frequently used for understanding different aspects of this fundamental concept. The occurrence of interference rests on the lack of which-way information and on the absence of decoherence mechanisms, which could scramble the wave fronts. Here, we report on the observation of two-center interference in the molecular-frame photoelectron momentum distribution upon ionization of the neon dimer by a strong laser field. Postselection of ions, which are measured in coincidence with electrons, allows choosing the symmetry of the residual ion, leading to observation of both, gerade and ungerade, types of interference.

M. Neumann,  D. Sampathu,  L K Kwong … (2006)
Ubiquitin-positive, tau- and alpha-synuclein-negative inclusions are hallmarks of frontotemporal lobar degeneration with ubiquitin-positive inclusions and amyotrophic lateral sclerosis. Although the identity of the ubiquitinated protein specific to either disorder was unknown, we showed that TDP-43 is the major disease protein in both disorders. Pathologic TDP-43 was hyper-phosphorylated, ubiquitinated, and cleaved to generate C-terminal fragments and was recovered only from affected central nervous system regions, including hippocampus, neocortex, and spinal cord. TDP-43 represents the common pathologic substrate linking these neurodegenerative disorders.

Mariely DeJesus-Hernandez,  Ian R. Mackenzie,  Bradley F. Boeve … (2011)
Several families have been reported with autosomal-dominant frontotemporal dementia (FTD) and amyotrophic lateral sclerosis (ALS), genetically linked to chromosome 9p21. Here, we report an expansion of a noncoding GGGGCC hexanucleotide repeat in the gene C9ORF72 that is strongly associated with disease in a large FTD/ALS kindred, previously reported to be conclusively linked to chromosome 9p. This same repeat expansion was identified in the majority of our families with a combined FTD/ALS phenotype and TDP-43-based pathology. Analysis of extended clinical series found the C9ORF72 repeat expansion to be the most common genetic abnormality in both familial FTD (11.7%) and familial ALS (23.5%). The repeat expansion leads to the loss of one alternatively spliced C9ORF72 transcript and to formation of nuclear RNA foci, suggesting multiple disease mechanisms. Our findings indicate that repeat expansion in C9ORF72 is a major cause of both FTD and ALS. Copyright © 2011 Elsevier Inc. All rights reserved.