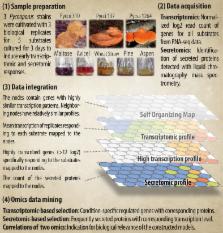 Wood-decay fungi contain the cellular mechanisms to decompose such plant cell wall components as cellulose, hemicellulose, and lignin. A multi-omics approach to the comparative analysis of wood-decay fungi gives not only new insights into their strategies for decomposing recalcitrant plant biomass, but also an understanding of how to exploit these mechanisms for biotechnological applications. We have developed an analytical workflow, Applied Biomass Conversion Design for Efficient Fungal Green Technology (ABCDEFGT), to simplify the analysis and interpretation of transcriptomic and secretomic data. ABCDEFGT utilizes self-organizing maps for grouping genes with similar transcription patterns, and an overlay with secreted proteins. The key feature of ABCDEFGT is simple graphic outputs of genome-wide transcriptomic and secretomic topographies, which enables visual inspection without a priori of the omics data and facilitates discoveries of co-regulated genes and proteins. Genome-wide omics landscapes were built with the newly sequenced fungal species Pycnoporus coccineus, Pycnoporus sanguineus, and Pycnoporus cinnabarinus grown on various carbon sources. Integration of the post-genomic data revealed a global overlap, confirming the pertinence of the genome-wide approach. ABCDEFGT was evaluated by comparison with the latest clustering method for ease of output interpretation, and ABCDEFGT gave a better biological representation of fungal behaviors. The genome-wide multi-omics strategy allowed us to determine the potential synergy of particular enzymes decomposing cellulose, hemicellulose, and lignin such as Lytic Polysaccharide Monooxygenases, modular enzymes associated with a cellulose binding module1, and Class II Peroxidase isoforms co-regulated with oxido-reductases. Overall, ABCDEFGT was capable of visualizing genome-wide transcriptional and secretomic profiles for intuitive interpretations and is suitable for exploration of newly-sequenced organisms.

Anthony Levasseur,  Elodie Drula,  Vincent Lombard … (2013)
Background Since its inception, the carbohydrate-active enzymes database (CAZy; http://www.cazy.org) has described the families of enzymes that cleave or build complex carbohydrates, namely the glycoside hydrolases (GH), the polysaccharide lyases (PL), the carbohydrate esterases (CE), the glycosyltransferases (GT) and their appended non-catalytic carbohydrate-binding modules (CBM). The recent discovery that members of families CBM33 and family GH61 are in fact lytic polysaccharide monooxygenases (LPMO), demands a reclassification of these families into a suitable category. Results Because lignin is invariably found together with polysaccharides in the plant cell wall and because lignin fragments are likely to act in concert with (LPMO), we have decided to join the families of lignin degradation enzymes to the LPMO families and launch a new CAZy class that we name “Auxiliary Activities” in order to accommodate a range of enzyme mechanisms and substrates related to lignocellulose conversion. Comparative analyses of these auxiliary activities in 41 fungal genomes reveal a pertinent division of several fungal groups and subgroups combining their phylogenetic origin and their nutritional mode (white vs. brown rot). Conclusions The new class introduced in the CAZy database extends the traditional CAZy families, and provides a better coverage of the full extent of the lignocellulose breakdown machinery.

Emmanuelle Morin,  Robert Otillar,  Kurt Labutti … (2014)
Basidiomycota (basidiomycetes) make up 32% of the described fungi and include most wood-decaying species, as well as pathogens and mutualistic symbionts. Wood-decaying basidiomycetes have typically been classified as either white rot or brown rot, based on the ability (in white rot only) to degrade lignin along with cellulose and hemicellulose. Prior genomic comparisons suggested that the two decay modes can be distinguished based on the presence or absence of ligninolytic class II peroxidases (PODs), as well as the abundance of enzymes acting directly on crystalline cellulose (reduced in brown rot). To assess the generality of the white-rot/brown-rot classification paradigm, we compared the genomes of 33 basidiomycetes, including four newly sequenced wood decayers, and performed phylogenetically informed principal-components analysis (PCA) of a broad range of gene families encoding plant biomass-degrading enzymes. The newly sequenced Botryobasidium botryosum and Jaapia argillacea genomes lack PODs but possess diverse enzymes acting on crystalline cellulose, and they group close to the model white-rot species Phanerochaete chrysosporium in the PCA. Furthermore, laboratory assays showed that both B. botryosum and J. argillacea can degrade all polymeric components of woody plant cell walls, a characteristic of white rot. We also found expansions in reducing polyketide synthase genes specific to the brown-rot fungi. Our results suggest a continuum rather than a dichotomy between the white-rot and brown-rot modes of wood decay. A more nuanced categorization of rot types is needed, based on an improved understanding of the genomics and biochemistry of wood decay.

Regulation of Cellulase and Hemicellulase Gene Expression in Fungi

Antonella Amore,  Simona Giacobbe,  Vincenza Faraco (2013)
Research on regulation of cellulases and hemicellulases gene expression may be very useful for increasing the production of these enzymes in their native producers. Mechanisms of gene regulation of cellulase and hemicellulase expression in filamentous fungi have been studied, mainly in Aspergillus and Trichoderma. The production of these extracellular enzymes is an energy-consuming process, so the enzymes are produced only under conditions in which the fungus needs to use plant polymers as an energy and carbon source. Moreover, production of many of these enzymes is coordinately regulated, and induced in the presence of the substrate polymers. In addition to induction by mono- and oligo-saccharides, genes encoding hydrolytic enzymes involved in plant cell wall deconstruction in filamentous fungi can be repressed during growth in the presence of easily metabolizable carbon sources, such as glucose. Carbon catabolite repression is an important mechanism to repress the production of plant cell wall degrading enzymes during growth on preferred carbon sources. This manuscript reviews the recent advancements in elucidation of molecular mechanisms responsible for regulation of expression of cellulase and hemicellulase genes in fungi.

This article was submitted to Microbiotechnology, Ecotoxicology and Bioremediation, a section of the journal Frontiers in Microbiology