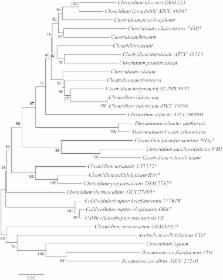 Clostridium termitidis strain CT1112 is an anaerobic, gram positive, mesophilic, cellulolytic bacillus isolated from the gut of the wood-feeding termite, Nasutitermes lujae. It produces biofuels such as hydrogen and ethanol from cellulose, cellobiose, xylan, xylose, glucose, and other sugars, and therefore could be used for biofuel production from biomass through consolidated bioprocessing. The first step in the production of biofuel from biomass by microorganisms is the hydrolysis of complex carbohydrates present in biomass. This is achieved through the presence of a repertoire of secreted or complexed carbohydrate active enzymes (CAZymes), sometimes organized in an extracellular organelle called cellulosome. To assess the ability and understand the mechanism of polysaccharide hydrolysis in C. termitidis, the recently sequenced strain CT1112 of C. termitidis was analyzed for both CAZymes and cellulosomal components, and compared to other cellulolytic bacteria. A total of 355 CAZyme sequences were identified in C. termitidis, significantly higher than other Clostridial species. Of these, high numbers of glycoside hydrolases (199) and carbohydrate binding modules (95) were identified. The presence of a variety of CAZymes involved with polysaccharide utilization/degradation ability suggests hydrolysis potential for a wide range of polysaccharides. In addition, dockerin-bearing enzymes, cohesion domains and a cellulosomal gene cluster were identified, indicating the presence of potential cellulosome assembly.

Koichiro Tamura,  Joel T Dudley,  Masatoshi Nei … (2007)
We announce the release of the fourth version of MEGA software, which expands on the existing facilities for editing DNA sequence data from autosequencers, mining Web-databases, performing automatic and manual sequence alignment, analyzing sequence alignments to estimate evolutionary distances, inferring phylogenetic trees, and testing evolutionary hypotheses. Version 4 includes a unique facility to generate captions, written in figure legend format, in order to provide natural language descriptions of the models and methods used in the analyses. This facility aims to promote a better understanding of the underlying assumptions used in analyses, and of the results generated. Another new feature is the Maximum Composite Likelihood (MCL) method for estimating evolutionary distances between all pairs of sequences simultaneously, with and without incorporating rate variation among sites and substitution pattern heterogeneities among lineages. This MCL method also can be used to estimate transition/transversion bias and nucleotide substitution pattern without knowledge of the phylogenetic tree. This new version is a native 32-bit Windows application with multi-threading and multi-user supports, and it is also available to run in a Linux desktop environment (via the Wine compatibility layer) and on Intel-based Macintosh computers under the Parallels program. The current version of MEGA is available free of charge at (http://www.megasoftware.net).

N Saitou,  M Nei,  Andrey Rzhetsky (1987)
A new method called the neighbor-joining method is proposed for reconstructing phylogenetic trees from evolutionary distance data. The principle of this method is to find pairs of operational taxonomic units (OTUs [= neighbors]) that minimize the total branch length at each stage of clustering of OTUs starting with a starlike tree. The branch lengths as well as the topology of a parsimonious tree can quickly be obtained by using this method. Using computer simulation, we studied the efficiency of this method in obtaining the correct unrooted tree in comparison with that of five other tree-making methods: the unweighted pair group method of analysis, Farris's method, Sattath and Tversky's method, Li's method, and Tateno et al.'s modified Farris method. The new, neighbor-joining method and Sattath and Tversky's method are shown to be generally better than the other methods.

This work was supported by funds provided by Genome Canada, through the Applied Genomics Research in Bioproducts or Crops (ABC) program, for the grant titled, “Microbial Genomics for Biofuels and CoProducts from Biorefining Processes”, and by the Province of Manitoba, Agricultural and Rural Development Initiative (ARDI). The funders had no role in study design, data collection and analysis, decision to publish, or preparation of the manuscript.