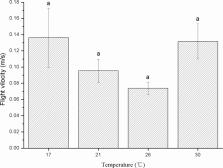 The movement behavior of the pine needle gall midge ( Thecodiplosis japonensis Uchida Et Inouye (Diptera: Cecidomyiidae)), an invasive species in China, was determined by using a tethered flight technique and digital videography in the laboratory. The flight distance, duration, and speed of females were compared at different ages (2–10 h) and ambient temperatures (17, 21, 26, and 30°C). Female flight distance and duration at 26°C were significantly greater than those at 17°C and 21°C. The age of T. japonensis did not significantly affect the three flight characteristics. For females at 2–10 h of age at 26°C and 70% RH, the maximum flight distance was 667.59 m; the longest flight time was 6,222.34 s; and the fastest flight speed was 0.44 m·s −1. For larvae wetted with water, the highest jump was 5.7 cm; the longest jump was 9.6 cm; and the greatest distance moved in 5 min was 27.13 cm, which showed that the active dispersal potential of larvae was very low.

Peter E. Smouse,  Ran Nathan,  Eloy Revilla … (2008)
Movement of individual organisms is fundamental to life, quilting our planet in a rich tapestry of phenomena with diverse implications for ecosystems and humans. Movement research is both plentiful and insightful, and recent methodological advances facilitate obtaining a detailed view of individual movement. Yet, we lack a general unifying paradigm, derived from first principles, which can place movement studies within a common context and advance the development of a mature scientific discipline. This introductory article to the Movement Ecology Special Feature proposes a paradigm that integrates conceptual, theoretical, methodological, and empirical frameworks for studying movement of all organisms, from microbes to trees to elephants. We introduce a conceptual framework depicting the interplay among four basic mechanistic components of organismal movement: the internal state (why move?), motion (how to move?), and navigation (when and where to move?) capacities of the individual and the external factors affecting movement. We demonstrate how the proposed framework aids the study of various taxa and movement types; promotes the formulation of hypotheses about movement; and complements existing biomechanical, cognitive, random, and optimality paradigms of movement. The proposed framework integrates eclectic research on movement into a structured paradigm and aims at providing a basis for hypothesis generation and a vehicle facilitating the understanding of the causes, mechanisms, and spatiotemporal patterns of movement and their role in various ecological and evolutionary processes. "Now we must consider in general the common reason for moving with any movement whatever." (Aristotle, De Motu Animalium, 4th century B.C.).

Analysis of the Effect of Temperature on Insects in Flight

Flight Performance of Agrilus planipennis (Coleoptera: Buprestidae) on a Flight Mill and in Free Flight