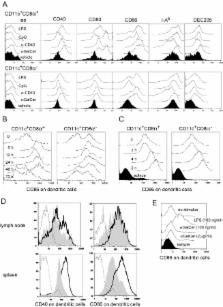 The maturation of dendritic cells (DCs) allows these antigen-presenting cells to initiate immunity. We pursued this concept in situ by studying the adjuvant action of α-galactosylceramide (αGalCer) in mice. A single i.v. injection of glycolipid induced the full maturation of splenic DCs, beginning within 4 h. Maturation was manifest by marked increases in costimulator and major histocompatibility complex class II expression, interferon (IFN)-γ production, and stimulation of the mixed leukocyte reaction. These changes were not induced directly by αGalCer but required natural killer T (NKT) cells acting independently of the MyD88 adaptor protein. To establish that DC maturation was responsible for the adjuvant role of αGalCer, mice were given αGalCer together with soluble or cell-associated ovalbumin antigen. Th1 type CD4 + and CD8 + T cell responses developed, and the mice became resistant to challenge with ovalbumin-expressing tumor. DCs from mice given ovalbumin plus adjuvant, but not the non-DCs, stimulated ovalbumin-specific proliferative responses and importantly, induced antigen-specific, IFN-γ producing, CD4 + and CD8 + T cells upon transfer into naive animals. In the latter instance, immune priming did not require further exposure to ovalbumin, αGalCer, NKT, or NK cells. Therefore a single dose of αGalCer i.v. rapidly stimulates the full maturation of DCs in situ, and this accounts for the induction of combined Th1 CD4 + and CD8 + T cell immunity to a coadministered protein.

R Medzhitov (2001)
Toll-like receptors have a crucial role in the detection of microbial infection in mammals and insects. In mammals, these receptors have evolved to recognize conserved products unique to microbial metabolism. This specificity allows the Toll proteins to detect the presence of infection and to induce activation of inflammatory and antimicrobial innate immune responses. Recognition of microbial products by Toll-like receptors expressed on dendritic cells triggers functional maturation of dendritic cells and leads to initiation of antigen-specific adaptive immune responses.

Daniel Hawiger,  Kayo Inaba,  Yair Dorsett … (2001)
Dendritic cells (DCs) have the capacity to initiate immune responses, but it has been postulated that they may also be involved in inducing peripheral tolerance. To examine the function of DCs in the steady state we devised an antigen delivery system targeting these specialized antigen presenting cells in vivo using a monoclonal antibody to a DC-restricted endocytic receptor, DEC-205. Our experiments show that this route of antigen delivery to DCs is several orders of magnitude more efficient than free peptide in complete Freund's adjuvant (CFA) in inducing T cell activation and cell division. However, T cells activated by antigen delivered to DCs are not polarized to produce T helper type 1 cytokine interferon γ and the activation response is not sustained. Within 7 d the number of antigen-specific T cells is severely reduced, and the residual T cells become unresponsive to systemic challenge with antigen in CFA. Coinjection of the DC-targeted antigen and anti-CD40 agonistic antibody changes the outcome from tolerance to prolonged T cell activation and immunity. We conclude that in the absence of additional stimuli DCs induce transient antigen-specific T cell activation followed by T cell deletion and unresponsiveness.

Unresponsiveness of MyD88-deficient mice to endotoxin.

Taro Kawai,  Osamu Adachi,  Tomohiko Ogawa … (1999)
MyD88 is a general adaptor protein that plays an important role in the Toll/IL-1 receptor family signalings. Recently, Toll-like receptors 2 and 4 (TLR2 and TLR4) have been suggested to be the signaling receptors for lipopolysaccharide (LPS). In this study, we demonstrate that MyD88 knockout mice lack the ability to respond to LPS as measured by shock response, B cell proliferative response, and secretion of cytokines by macrophages and embryonic fibroblasts. However, activation of neither NF-kappaB nor the mitogen-activated protein (MAP) kinase family is abolished in MyD88 knockout mice. These findings demonstrate that signaling via MyD88 is essential for LPS response, but the inability of MyD88 knockout mice to induce LPS-dependent gene expression cannot simply be attributed to lack of the activation of MAP kinases and NF-kappaB.