The changing epidemiology of dengue in China, 1990-2014: a descriptive analysis of 25 years of nationwide surveillance data 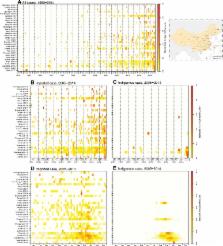 Dengue has been a notifiable disease in China since 1 September 1989. Cases have been reported each year during the past 25 years of dramatic socio-economic changes in China, and reached a historical high in 2014. This study describes the changing epidemiology of dengue in China during this period, to identify high-risk areas and seasons and to inform dengue prevention and control activities.

We describe the incidence and distribution of dengue in mainland China using notifiable surveillance data from 1990-2014, which includes classification of imported and indigenous cases from 2005-2014.

From 1990-2014, 69,321 cases of dengue including 11 deaths were reported in mainland China, equating to 2.2 cases per one million residents. The highest number was recorded in 2014 (47,056 cases). The number of provinces affected has increased, from a median of three provinces per year (range: 1 to 5 provinces) during 1990-2000 to a median of 14.5 provinces per year (range: 5 to 26 provinces) during 2001-2014. During 2005-2014, imported cases were reported almost every month and 28 provinces (90.3%) were affected. However, 99.8% of indigenous cases occurred between July and November. The regions reporting indigenous cases have expanded from the coastal provinces of southern China and provinces adjacent to Southeast Asia to the central part of China. Dengue virus serotypes 1, 2, 3, and 4 were all detected from 2009-2014.

In China, the area affected by dengue has expanded since 2000 and the incidence has increased steadily since 2012, for both imported and indigenous dengue. Surveillance and control strategies should be adjusted to account for these changes, and further research should explore the drivers of these trends.

Oliver J Brady, Michael Johansson, Carlos Guerra … (2013)
Background The survival of adult female Aedes mosquitoes is a critical component of their ability to transmit pathogens such as dengue viruses. One of the principal determinants of Aedes survival is temperature, which has been associated with seasonal changes in Aedes populations and limits their geographical distribution. The effects of temperature and other sources of mortality have been studied in the field, often via mark-release-recapture experiments, and under controlled conditions in the laboratory. Survival results differ and reconciling predictions between the two settings has been hindered by variable measurements from different experimental protocols, lack of precision in measuring survival of free-ranging mosquitoes, and uncertainty about the role of age-dependent mortality in the field. Methods Here we apply generalised additive models to data from 351 published adult Ae. aegypti and Ae. albopictus survival experiments in the laboratory to create survival models for each species across their range of viable temperatures. These models are then adjusted to estimate survival at different temperatures in the field using data from 59 Ae. aegypti and Ae. albopictus field survivorship experiments. The uncertainty at each stage of the modelling process is propagated through to provide confidence intervals around our predictions. Results Our results indicate that adult Ae. albopictus has higher survival than Ae. aegypti in the laboratory and field, however, Ae. aegypti can tolerate a wider range of temperatures. A full breakdown of survival by age and temperature is given for both species. The differences between laboratory and field models also give insight into the relative contributions to mortality from temperature, other environmental factors, and senescence and over what ranges these factors can be important. Conclusions Our results support the importance of producing site-specific mosquito survival estimates. By including fluctuating temperature regimes, our models provide insight into seasonal patterns of Ae. aegypti and Ae. albopictus population dynamics that may be relevant to seasonal changes in dengue virus transmission. Our models can be integrated with Aedes and dengue modelling efforts to guide and evaluate vector control, better map the distribution of disease and produce early warning systems for dengue epidemics.

Paul James, Xiao Chen, Zhao-Rong Lun … (2010)
Dengue is an acute emerging infectious disease transmitted by Aedes mosquitoes and has become a serious global public health problem. In mainland China, a number of large dengue outbreaks with serious consequences have been reported as early as 1978. In the three decades from 1978 to 2008, a total of 655,324 cases were reported, resulting in 610 deaths. Since the 1990s, dengue epidemics have spread gradually from Guangdong, Hainan, and Guangxi provinces in the southern coastal regions to the relatively northern and western regions including Fujian, Zhejiang, and Yunnan provinces. As the major transmission vectors of dengue viruses, the biological behavior and vectorial capacity of Aedes mosquitoes have undergone significant changes in the last two decades in mainland China, most likely the result of urbanization and global climate changes. In this review, we summarize the geographic and temporal distributions, the serotype and genotype distributions of dengue viruses in mainland China, and analyze the current status of surveillance and control of vectors for dengue transmission.

Determinants of Inapparent and Symptomatic Dengue Infection in a Prospective Study of Primary School Children in Kamphaeng Phet, Thailand