Is predictability salient? A study of attentional capture by auditory patterns 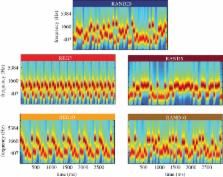 Journal: Philosophical Transactions of the Royal Society B: Biological Sciences

In this series of behavioural and electroencephalography (EEG) experiments, we investigate the extent to which repeating patterns of sounds capture attention. Work in the visual domain has revealed attentional capture by statistically predictable stimuli, consistent with predictive coding accounts which suggest that attention is drawn to sensory regularities. Here, stimuli comprised rapid sequences of tone pips, arranged in regular (REG) or random (RAND) patterns. EEG data demonstrate that the brain rapidly recognizes predictable patterns manifested as a rapid increase in responses to REG relative to RAND sequences. This increase is reminiscent of the increase in gain on neural responses to attended stimuli often seen in the neuroimaging literature, and thus consistent with the hypothesis that predictable sequences draw attention. To study potential attentional capture by auditory regularities, we used REG and RAND sequences in two different behavioural tasks designed to reveal effects of attentional capture by regularity. Overall, the pattern of results suggests that regularity does not capture attention.

This article is part of the themed issue ‘Auditory and visual scene analysis’.

Statistical learning of tone sequences by human infants and adults.

Laurent Itti,  Pierre Baldi (2009)
We propose a formal Bayesian definition of surprise to capture subjective aspects of sensory information. Surprise measures how data affects an observer, in terms of differences between posterior and prior beliefs about the world. Only data observations which substantially affect the observer's beliefs yield surprise, irrespectively of how rare or informative in Shannon's sense these observations are. We test the framework by quantifying the extent to which humans may orient attention and gaze towards surprising events or items while watching television. To this end, we implement a simple computational model where a low-level, sensory form of surprise is computed by simple simulated early visual neurons. Bayesian surprise is a strong attractor of human attention, with 72% of all gaze shifts directed towards locations more surprising than the average, a figure rising to 84% when focusing the analysis onto regions simultaneously selected by all observers. The proposed theory of surprise is applicable across different spatio-temporal scales, modalities, and levels of abstraction.

These authors contributed equally to this study.

One contribution of 15 to a theme issue ‘ Auditory and visual scene analysis’.