The effect of dimethyl sulfoxide on the induction of DNA strand breaks in plasmid DNA and colony formation of PC Cl3 mammalian cells by alpha-, beta-, and Auger electron emitters 223Ra, 188Re, and 99mTc 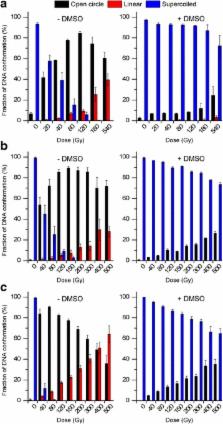 DNA damage occurs as a consequence of both direct and indirect effects of ionizing radiation. The severity of DNA damage depends on the physical characteristics of the radiation quality, e.g., the linear energy transfer (LET). There are still contrary findings regarding direct or indirect interactions of high-LET emitters with DNA. Our aim is to determine DNA damage and the effect on cellular survival induced by 223Ra compared to 188Re and 99mTc modulated by the radical scavenger dimethyl sulfoxide (DMSO).

Radioactive solutions of 223Ra, 188Re, or 99mTc were added to either plasmid DNA or to PC Cl3 cells in the absence or presence of DMSO. Following irradiation, single strand breaks (SSB) and double strand breaks (DSB) in plasmid DNA were analyzed by gel electrophoresis. To determine the radiosensitivity of the rat thyroid cell line (PC Cl3), survival curves were performed using the colony formation assay.

For 223Ra, as well as for 188Re and 99mTc, dose-dependent radiation effects were found applicable for plasmid DNA and PC Cl3 cells. The radioprotection by DMSO was in the same range for high- and low-LET emitter. Overall, the results indicate the contribution of mainly indirect radiation effects for each of the radionuclides regarding DNA damage and cell survival. In summary, our findings may contribute to fundamental knowledge about the α-particle induced DNA damage.

Clonogenic assay of cells in vitro.

Hans Rodermond,  Nicolaas Franken,  Jaap Haveman … (2005)
Clonogenic assay or colony formation assay is an in vitro cell survival assay based on the ability of a single cell to grow into a colony. The colony is defined to consist of at least 50 cells. The assay essentially tests every cell in the population for its ability to undergo "unlimited" division. Clonogenic assay is the method of choice to determine cell reproductive death after treatment with ionizing radiation, but can also be used to determine the effectiveness of other cytotoxic agents. Only a fraction of seeded cells retains the capacity to produce colonies. Before or after treatment, cells are seeded out in appropriate dilutions to form colonies in 1-3 weeks. Colonies are fixed with glutaraldehyde (6.0% v/v), stained with crystal violet (0.5% w/v) and counted using a stereomicroscope. A method for the analysis of radiation dose-survival curves is included.

J Vidal,  P Wiechno,  A Widmark … (2013)
Radium-223 dichloride (radium-223), an alpha emitter, selectively targets bone metastases with alpha particles. We assessed the efficacy and safety of radium-223 as compared with placebo, in addition to the best standard of care, in men with castration-resistant prostate cancer and bone metastases. In our phase 3, randomized, double-blind, placebo-controlled study, we randomly assigned 921 patients who had received, were not eligible to receive, or declined docetaxel, in a 2:1 ratio, to receive six injections of radium-223 (at a dose of 50 kBq per kilogram of body weight intravenously) or matching placebo; one injection was administered every 4 weeks. In addition, all patients received the best standard of care. The primary end point was overall survival. The main secondary efficacy end points included time to the first symptomatic skeletal event and various biochemical end points. A prespecified interim analysis, conducted when 314 deaths had occurred, assessed the effect of radium-223 versus placebo on survival. An updated analysis, when 528 deaths had occurred, was performed before crossover from placebo to radium-223. At the interim analysis, which involved 809 patients, radium-223, as compared with placebo, significantly improved overall survival (median, 14.0 months vs. 11.2 months; hazard ratio, 0.70; 95% confidence interval [CI], 0.55 to 0.88; two-sided P=0.002). The updated analysis involving 921 patients confirmed the radium-223 survival benefit (median, 14.9 months vs. 11.3 months; hazard ratio, 0.70; 95% CI, 0.58 to 0.83; P<0.001). Assessments of all main secondary efficacy end points also showed a benefit of radium-233 as compared with placebo. Radium-223 was associated with low myelosuppression rates and fewer adverse events. In this study, which was terminated for efficacy at the prespecified interim analysis, radium-223 improved overall survival. (Funded by Algeta and Bayer HealthCare Pharmaceuticals; ALSYMPCA ClinicalTrials.gov number, NCT00699751.).