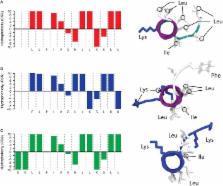 The frog skin-derived peptide Temporin 1Tb (TB) has gained increasing attention as novel antimicrobial agent for the treatment of antibiotic-resistant and/or biofilm-mediated infections. Nevertheless, such a peptide possesses a preferential spectrum of action against Gram-positive bacteria. In order to improve the therapeutic potential of TB, the present study evaluated the antibacterial and antibiofilm activities of two TB analogs against medically relevant bacterial species. Of the two analogs, TB_KKG6A has been previously described in the literature, while TB_L1FK is a new analog designed by us through statistical-based computational strategies. Both TB analogs displayed a faster and stronger bactericidal activity than the parental peptide, especially against Gram-negative bacteria in planktonic form. Differently from the parental peptide, TB_KKG6A and TB_L1FK were able to inhibit the formation of Staphylococcus aureus biofilms by more than 50% at 12 μM, while only TB_KKG6A prevented the formation of Pseudomonas aeruginosa biofilms at 24 μM. A marked antibiofilm activity against preformed biofilms of both bacterial species was observed for the two TB analogs when used in combination with EDTA. Analysis of synergism at the cellular level suggested that the antibiofilm activity exerted by the peptide-EDTA combinations against mature biofilms might be due mainly to a disaggregating effect on the extracellular matrix in the case of S. aureus, and to a direct activity on biofilm-embedded cells in the case of P. aeruginosa. Both analogs displayed a low hemolytic effect at the active concentrations and, overall, TB_L1FK resulted less cytotoxic toward mammalian cells. Collectively, the results obtained demonstrated that subtle changes in the primary sequence of TB may provide TB analogs that, used alone or in combination with adjuvant molecules such as EDTA, exhibit promising features against both planktonic and biofilm cells of medically relevant bacteria.

Bacterial Biofilms: A Common Cause of Persistent Infections

Alexis Lamiable, Pierre Thévenet, Julien Rey … (2016)
Structure determination of linear peptides of 5–50 amino acids in aqueous solution and interacting with proteins is a key aspect in structural biology. PEP-FOLD3 is a novel computational framework, that allows both (i) de novo free or biased prediction for linear peptides between 5 and 50 amino acids, and (ii) the generation of native-like conformations of peptides interacting with a protein when the interaction site is known in advance. PEP-FOLD3 is fast, and usually returns solutions in a few minutes. Testing PEP-FOLD3 on 56 peptides in aqueous solution led to experimental-like conformations for 80% of the targets. Using a benchmark of 61 peptide–protein targets starting from the unbound form of the protein receptor, PEP-FOLD3 was able to generate peptide poses deviating on average by 3.3Å from the experimental conformation and return a native-like pose in the first 10 clusters for 52% of the targets. PEP-FOLD3 is available at http://bioserv.rpbs.univ-paris-diderot.fr/services/PEP-FOLD3.

Mechanism of the binding, insertion and destabilization of phospholipid bilayer membranes by alpha-helical antimicrobial and cell non-selective membrane-lytic peptides.

Y Shai (1999)
Permeation of the cell membrane leading to cell death is a mechanism used by a large number of membrane-lytic peptides. Some are linear, mostly helical, and others contain one or more disulfide bonds forming beta-sheet or both beta-sheet and alpha-helix structures. They are all soluble in solution but when they reach the target membrane, conformational changes occur which let them associate with and lyse the membrane. Some lytic peptides are not cell-selective and lyse different microorganisms and normal mammalian cells, while others are specific to either type of cells. Despite extensive studies, the mode of action of membrane-lytic peptides is not fully understood and the basis for their selectivity towards specific target cells is not known. Many studies have shown that peptide-lipid interactions leading to membrane permeation play a major role in their activity. Membrane permeation by amphipathic alpha-helical peptides has been proposed to occur via one of two general mechanisms: (i) transmembrane pore formation via a 'barrel-stave' mechanism; and (ii) membrane destruction/solubilization via a 'carpet' mechanism. This review, which is focused on the different stages of membrane permeation induced by representatives of amphipathic alpha-helical antimicrobial and cell non-selective lytic peptides distinguishes between the 'carpet' mechanism, which holds for antimicrobial peptides versus the 'barrel-stave' mechanism, which holds for cell non-selective lytic peptides.

This article was submitted to Chemical Biology, a section of the journal Frontiers in Chemistry