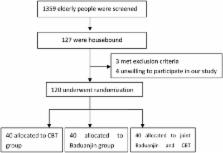 To investigate the effectiveness of Baduanjin qigong combined with cognitive-behavior therapy (CBT) on the physical fitness and psychological health of elderly housebound.

The 120 elderly housebound were randomly divided into 3 intervention groups: Baduanjin training, Baduanjin training combined with CBT, and CBT. The interventions were conducted by means of home visits over 6 months. Spirometry, SF-36 health survey of quality of life, and Lawton and Brody Instrumental Activities of Daily Living Scale (IADL) were used to collect physical health data, and self-evaluation of overall health status, self-evaluation of loneliness, and short-form geriatric depression scale (GDS-15) were used to collect mental health data at baseline, 3 months, and 6 months after intervention. Data was analyzed by repeated measures analysis of variance (rANOVA) and chi-squared test (χ 2 test).

Physical and psychological statuses of elderly housebound were significantly improved by Baduanjin training combined with CBT. The effect of the combined intervention exceeded that of CBT or Baduanjin alone.

The effect of antihypertensive agents on sleep apnea: protocol for a randomized controlled trial

Fábio Tremea Cichelero,  Denis Martinez,  Sandra Costa Fuchs … (2014)
Background Obstructive sleep apnea (OSA) and hypertension are well-known cardiovascular risk factors. Their control could reduce the burden of heart disease across populations. Several drugs are used to control hypertension, but the only consistently effective treatment of OSA is continuous positive airway pressure. The identification of a drug capable of improving OSA and hypertension simultaneously would provide a novel approach in the treatment of both diseases. Methods/Design This is a randomized double-blind clinical trial, comparing the use of chlorthalidone with amiloride versus amlodipine as a first drug option in patients older than 40 years of age with stage I hypertension (140 to 159/90 to 99 mmHg) and moderate OSA (15 to 30 apneas/hour of sleep). The primary outcomes are the variation of the number of apneas per hour and blood pressure measured by ambulatory blood pressure monitoring. The secondary outcomes are adverse events, somnolence scale (Epworth), ventilatory parameters and C reactive protein levels. The follow-up will last 8 weeks. There will be 29 participants per group. The project has been approved by the ethics committee of our institution. Discussion The role of fluid retention in OSA has been known for several decades. The use of diuretics are well established in treating hypertension but have never been appropriately tested for sleep apnea. As well as testing the efficacy of these drugs, this study will help to understand the mechanisms that link hypertension and sleep apnea and their treatment. Trial registration ClinicalTrials.gov: NCT01896661

Potential mental health consequences for workers in the Ebola regions of West Africa--a lesson for all challenging environments.

R Katzman,  Justine Yu,  Wen-Jer Chen … (1995)
To describe the prevalence of activities of daily living (ADL) dependence and medical conditions and the relationship between illnesses and ADL performance in the older population of Shanghai, China. Probability sample survey of community residents. The Jing An district of Shanghai, China. The interviews were carried out at the homes of the older persons. There were 3763 noninstitutionalized elders screened, 3745 of whom completed the interview. The dependent variables were the five basic ADL items: eating, dressing, transferring, toileting, and bathing. The independent variables were dementia and 19 self-reported medical conditions, along with age, gender and education level. Of those in Shanghai aged 65 and older, 8.28% (6.52% of males, 9.17% of females) were functionally dependent in one or more ADLs. The most prevalent self-reported illness was cardiovascular disease, including hypertension (29.12%) and heart disease (26.65%). ADL performance was associated with dementia and a number of medical conditions in univariate analysis. The best predictors of functional dependence in both age groups (65-74 years; 75 years and older), based on the multiple logistic regression analysis and after controlling for age, gender, and education, were stroke, dementia, Parkinson's disease, diabetes, and emphysema. The authors have successfully applied five ADL items selected and culturally adapted from Older Americans Resources and Services to the study of older Chinese. A consistent and reliable estimate of functional dependence among older persons is obtained. The prevalence of dementia and many self-reported illness, as well as the ADL status by medical condition, are reported. The findings reveal certain patterns of relationship between illness conditions and ADL performance.

[a ]National Academy of Development and Strategy, Renmin University of China
[b ]Nursing and Rehabilitation College, North China University of Science and Technology, Tangshan, China.

This is an open access article distributed under the terms of the Creative Commons Attribution-Non Commercial-No Derivatives License 4.0 (CCBY-NC-ND), where it is permissible to download and share the work provided it is properly cited. The work cannot be changed in any way or used commercially without permission from the journal. http://creativecommons.org/licenses/by-nc-nd/4.0