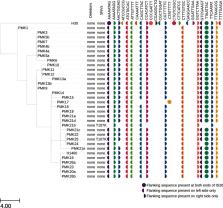 Much of the worldwide dissemination of antibiotic resistance has been driven by resistance gene associations with mobile genetic elements (MGEs), such as plasmids and transposons. Although increasing, our understanding of resistance spread remains relatively limited, as methods for tracking mobile resistance genes through multiple species, strains and plasmids are lacking. We have developed a bioinformatic pipeline for tracking variation within, and mobility of, specific transposable elements (TEs), such as transposons carrying antibiotic-resistance genes. TETyper takes short-read whole-genome sequencing data as input and identifies single-nucleotide mutations and deletions within the TE of interest, to enable tracking of specific sequence variants, as well as the surrounding genetic context(s), to enable identification of transposition events. A major advantage of TETyper over previous methods is that it does not require a genome reference. To investigate global dissemination of Klebsiella pneumoniae carbapenemase (KPC) and its associated transposon Tn 4401, we applied TETyper to a collection of over 3000 publicly available Illumina datasets containing bla KPC. This revealed surprising diversity, with over 200 distinct flanking genetic contexts for Tn 4401, indicating high levels of transposition. Integration of sample metadata revealed insights into associations between geographic locations, host species, Tn 4401 sequence variants and flanking genetic contexts. To demonstrate the ability of TETyper to cope with high-copy-number TEs and to track specific short-term evolutionary changes, we also applied it to the insertion sequence IS 26 within a defined K. pneumoniae outbreak. TETyper is implemented in python and is freely available at https://github.com/aesheppard/TETyper.

(2013)
Motivation: Most existing methods for DNA sequence analysis rely on accurate sequences or genotypes. However, in applications of the next-generation sequencing (NGS), accurate genotypes may not be easily obtained (e.g. multi-sample low-coverage sequencing or somatic mutation discovery). These applications press for the development of new methods for analyzing sequence data with uncertainty. Results: We present a statistical framework for calling SNPs, discovering somatic mutations, inferring population genetical parameters and performing association tests directly based on sequencing data without explicit genotyping or linkage-based imputation. On real data, we demonstrate that our method achieves comparable accuracy to alternative methods for estimating site allele count, for inferring allele frequency spectrum and for association mapping. We also highlight the necessity of using symmetric datasets for finding somatic mutations and confirm that for discovering rare events, mismapping is frequently the leading source of errors. Availability: http://samtools.sourceforge.net. Contact: hengli@broadinstitute.org.

David Eyre,  Madeleine Cule,  Daniel J Wilson … (2013)
It has been thought that Clostridium difficile infection is transmitted predominantly within health care settings. However, endemic spread has hampered identification of precise sources of infection and the assessment of the efficacy of interventions. From September 2007 through March 2011, we performed whole-genome sequencing on isolates obtained from all symptomatic patients with C. difficile infection identified in health care settings or in the community in Oxfordshire, United Kingdom. We compared single-nucleotide variants (SNVs) between the isolates, using C. difficile evolution rates estimated on the basis of the first and last samples obtained from each of 145 patients, with 0 to 2 SNVs expected between transmitted isolates obtained less than 124 days apart, on the basis of a 95% prediction interval. We then identified plausible epidemiologic links among genetically related cases from data on hospital admissions and community location. Of 1250 C. difficile cases that were evaluated, 1223 (98%) were successfully sequenced. In a comparison of 957 samples obtained from April 2008 through March 2011 with those obtained from September 2007 onward, a total of 333 isolates (35%) had no more than 2 SNVs from at least 1 earlier case, and 428 isolates (45%) had more than 10 SNVs from all previous cases. Reductions in incidence over time were similar in the two groups, a finding that suggests an effect of interventions targeting the transition from exposure to disease. Of the 333 patients with no more than 2 SNVs (consistent with transmission), 126 patients (38%) had close hospital contact with another patient, and 120 patients (36%) had no hospital or community contact with another patient. Distinct subtypes of infection continued to be identified throughout the study, which suggests a considerable reservoir of C. difficile. Over a 3-year period, 45% of C. difficile cases in Oxfordshire were genetically distinct from all previous cases. Genetically diverse sources, in addition to symptomatic patients, play a major part in C. difficile transmission. (Funded by the U.K. Clinical Research Collaboration Translational Infection Research Initiative and others.).

Plasmids and the spread of resistance.

Alessandra Carattoli (2013)
Plasmids represent one of the most difficult challenge for counteracting the dissemination of antimicrobial resistance. They contribute to the spread of relevant resistance determinants, promoting horizontal gene transfer among unrelated bacteria. Undistinguishable plasmids were identified in unrelated bacterial strains isolated at huge geographically distant area, with no apparent epidemiological links. These plasmids belong to families that are largely prevalent in naturally occurring bacteria, usually carry multiple physically linked genetic determinants, conferring resistance to different classes of antibiotics simultaneously. Plasmids also harbour virulence factors and addiction systems, promoting their stability and maintenance in the bacterial host, in different environmental conditions. The characteristics of the most successful plasmids that were at the origin of the spread of carbapenemase, expanded-spectrum β-lactamase, and plasmid-mediated quinolone resistance genes are discussed in this review. Copyright © 2013 Elsevier GmbH. All rights reserved.