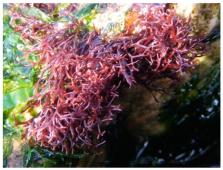 Antioxidant activities of sulfated polysaccharides from brown and red seaweeds

Micheline Rocha de Souza,  Cybelle Marques,  Celina Dore … (2006)
The in vitro antioxidant activities of the following six sulfated polysaccharides were investigated: iota, kappa and lambda carrageenans, which are widely used in the food industry, fucoidan (homofucan) from the edible seaweed Fucus vesiculosus and fucans (heterofucans) F0.5 and F1.1 from the seaweed Padina gymnospora. With respect to the inhibition of superoxide radical formation, fucoidan had an IC50 (the half maximal inhibitory concentration) of 0.058 mg·mL−1, while the IC50 for the kappa, iota and lambda carrageenans were 0.112, 0.332 and 0.046 mg·mL−1, respectively. All of the samples had an inhibitory effect on the formation of hydroxyl radicals. The results of peroxidation tests showed that fucoidan had an IC50 of 1.250 mg·mL−1 and that the kappa, iota and lambda carrageenans had an IC50 of 2.753 and 2.338 and 0.323 mg·mL−1, respectively. Fucan fractions showed low antioxidant activity relative to fucoidan. These results clearly indicate the beneficial effect of algal polysaccharides as antioxidants.

Zuzana Kozovska,  Veronika Gabrisova,  Lucia Kucerova (2014)
Malignant tumours consist of heterogeneous populations of tumour cells. Cancer stem cells (CSC) represent a population of cells within a tumour with highly tumorigenic and chemoresistant properties. These cells may be identified by the expression of CSC markers. There are several key stem cells markers specified for colon cancer: CD133, CD44, ALDH1, ALCAM. These days, a major obstacle to effective cancer management is development of a multidrug resistance (MDR). The principal mechanism responsible for development of MDR phenotype is the over-expression of ABC transporters. Tumours and relapsing tumours after therapy are drived by subpopulations of tumour cells with aggressive phenotype resistant to chemotherapeutics. These cells are called CSC or tumour-initiating cells (TIC). Here we outline recent information about MDR of colon cancer and CSC markers. We have focused on novel therapeutic strategies which have been developed to prevent or overcome MDR. One such strategy is a combination of chemotherapy and modulators of MDR pumps or chemotherapy and monoclonal antibodies against vascular endothelial growth factor VEGF. Colon cancer is characterized by the presence of colon CSC expressing specific stem cell markers. The divergent presence of these markers can help to adjust personalized therapy. The review provides a detailed overview of resistance of colon cancer cells and discusses how the presence of CSC markers can influence therapy and prognosis of patients.

J Necas,  L Bartosíková (2013)
Carrageenan is a natural carbohydrate (polysaccharide) obtained from edible red seaweeds. The name Carrageenan is derived from the Chondrus crispus species of seaweed known as Carrageen Moss or Irish Moss in England, and Carraigin in Ireland. Carraigin has been used in Ireland since 400 AD as a gelatin and as a home remedy to cure coughs and colds. It grows along the coasts of North America and Europe. Carrageenans are used in a variety of commercial applications as gelling, thickening, and stabilising agents, especially in food products and sauces. Aside from these functions, carrageenans are used in experimental medicine, pharmaceutical formulations, cosmetics, and industrial applications.