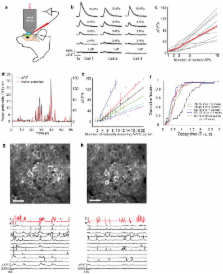 A simple method for organotypic cultures of nervous tissue.

A. Buchs,  Frank D. Müller,  L Stoppini (1991)
Hippocampal slices prepared from 2-23-day-old neonates were maintained in culture at the interface between air and a culture medium. They were placed on a sterile, transparent and porous membrane and kept in petri dishes in an incubator. No plasma clot or roller drum were used. This method yields thin slices which remain 1-4 cell layers thick and are characterized by a well preserved organotypic organization. Pyramidal neurons labelled by extra- and intracellular application of horse radish peroxidase resemble by the organization and complexity of their dendritic processes those observed in situ at a comparable developmental stage. Excitatory and inhibitory synaptic potentials can easily be analysed using extra- or intracellular recording techniques. After a few days in culture, long-term potentiation of synaptic responses can reproducibly be induced. Evidence for a sprouting response during the first days in culture or following sections is illustrated. This technique may represent an interesting alternative to roller tube cultures for studies of the developmental changes occurring during the first days or weeks in culture.