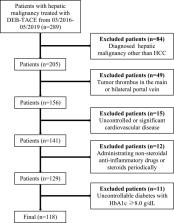 In this retrospective study, a total of 118 consecutive patients who underwent DEB-TACE between June 2016 and May 2019 with post-TACE pain were included. The patients were divided into three groups based on the severity of post-TACE pain according to the distribution of pain Visual Analogue Scale/Score (VAS). Potential risk factors for post-TACE pain were primarily analyzed using the chi-square test, one-way analysis of variance, or Kruskal–Wallis test (if appropriate). For multivariate analysis, an ordinal logistic regression model was utilized. Variables with P<0.10 in the univariate analysis were included in a multivariate model to identify independent risk factors for post-TACE pain. A multivariate analysis was also performed by means of a decision tree using the Classification and Regression Tree (CART) algorithm.

Nonsuperselective chemoembolization and PVTT are independent risk factors for pain after DEB-TACE. Therefore, these factors should be taken into full consideration for the relief of pain.

Myeong Song,  Ho Jong Chun,  Do Song … (2012)
Transarterial chemoembolization (TACE) is a widely used treatment for hepatocellular carcinoma. In order to maximize its therapeutic efficacy, doxorubicin-loaded drug-eluting beads have been developed to deliver higher doses of the chemotherapeutic agent and to prolong contact time with the tumor. The purpose of this study was to evaluate the efficacy and safety of drug-eluting bead (DC bead®) TACE in comparison with conventional TACE (cTACE). A total of 129 patients who underwent TACE between August 2008 and February 2011 were enrolled. We compared HCC patients who underwent TACE with DC bead® (n=60) to controls who received cTACE (n=69). The primary end points were treatment response and treatment-related adverse events. The secondary end point was time to progression. The treatment response in the DC bead® group was significantly higher than that of the cTACE group (p 0.05). TACE with DC bead® showed better treatment response and delayed tumor progression compared with cTACE. There was no significant difference in hepatic treatment-related toxicities. DC bead® TACE thus appears to be a feasible and promising approach to the treatment of HCC. Copyright © 2012 European Association for the Study of the Liver. Published by Elsevier B.V. All rights reserved.

B J Raskay,  D Leung,  J E Goin … (2001)
Postembolization syndrome (PES) occurs in the majority of patients undergoing hepatic chemoembolization, and is the major reason for hospitalization after the procedure. The ability to identify which groups of patients are at increased or decreased risk of PES would be useful to better counsel patients, to minimize toxicity, and to plan inpatient versus outpatient therapy. Seventy hepatic chemoembolization procedures were performed in 29 patients using cytotoxic drugs mixed with Ethiodol and polyvinyl alcohol. The following procedural variables were retrospectively assessed and evaluated for association with PES and length of postprocedural hospitalization: gallbladder embolization, lobe embolized, percentage liver volume embolized, percentage embolized volume occupied by tumor, previous embolization of the same territory, and dose of chemoembolic emulsion. Logistic regression was used to quantify the relative effect of each procedural variable. Gallbladder embolization and dose administered were associated with an increased risk of PES and an extended hospitalization, with odds ratios of 2.8 and 3.0, and 3.0 and 4.6, respectively. Previous embolization was associated with a decreased risk of both PES and extended hospitalization, with odds ratios of 0.5 and 0.4, respectively. There was a statistical trend toward significance for gallbladder embolization (P = .06), dose administered (P = .07), and previous embolization (P = .14). Clinically relevant predictors of the severity of PES and length of postprocedural hospitalization may exist. Avoiding embolization of the gallbladder reduces the risk of PES. Re-embolization of previously treated vessels is associated with decreased toxicity and may assist in selecting patients for treatment on an outpatient basis, especially when a reduced dose is required.

Fabio Piscaglia (corresponding) ,  Sadahisa Ogasawara (2018)
Background: Liver cancer is the second most common cause of cancer-related death, with hepatocellular carcinoma (HCC) accounting for most primary liver cancers and most commonly arising from a history of advanced chronic liver disease. Among the available therapies, transarterial chemoembolization (TACE) is the most widely utilized and is considered the first-line treatment recommended for patients staged as intermediate HCC (Barcelona Clinic Liver Cancer stage B). If applied correctly, TACE can produce survival benefits without adversely affecting hepatic functional reserve. Summary: The aim of this nonsystematic review is to evaluate the evidence supporting TACE, with a special interest in intermediate HCC, for which this treatment is recommended in first line. However, intermediate HCC represents a broad and heterogeneous group of patients, not all of whom will benefit from TACE. This review highlights the importance of appropriate patient selection for initial TACE and for retreatment. It also evaluates evidence for the treatment of patients who become refractory to TACE. Some patients may, in fact, benefit from early switch (i.e., after 1 or 2 TACE treatments) to systemic therapies rather than continuing retreatments with TACE in order to preserve liver function, thus allowing sequential first- and second-line drug therapies. Key Messages: Careful assessment of an individual patient's benefit/risk ratio is recommended before any TACE session is considered to ensure optimal long-term outcomes in intermediate HCC.