Happily (n)ever after: Aging in the context of oxidative stress, proteostasis loss and cellular senescence 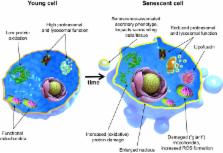 Aging is a complex phenomenon and its impact is becoming more relevant due to the rising life expectancy and because aging itself is the basis for the development of age-related diseases such as cancer, neurodegenerative diseases and type 2 diabetes. Recent years of scientific research have brought up different theories that attempt to explain the aging process. So far, there is no single theory that fully explains all facets of aging. The damage accumulation theory is one of the most accepted theories due to the large body of evidence found over the years. Damage accumulation is thought to be driven, among others, by oxidative stress. This condition results in an excess attack of oxidants on biomolecules, which lead to damage accumulation over time and contribute to the functional involution of cells, tissues and organisms. If oxidative stress persists, cellular senescence is a likely outcome and an important hallmark of aging. Therefore, it becomes crucial to understand how senescent cells function and how they contribute to the aging process. This review will cover cellular senescence features related to the protein pool such as morphological and molecular hallmarks, how oxidative stress promotes protein modifications, how senescent cells cope with them by proteostasis mechanisms, including antioxidant enzymes and proteolytic systems. We will also highlight the nutritional status of senescent cells and aged organisms (including human clinical studies) by exploring trace elements and micronutrients and on their importance to develop strategies that might increase both, life and health span and postpone aging onset. 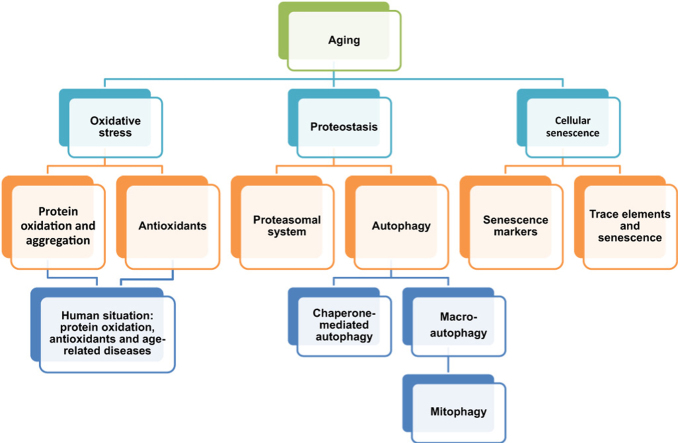 Andrea Lowe,  D Beach,  Solange Serrano … (1997)
Oncogenic ras can transform most immortal rodent cells to a tumorigenic state. However, transformation of primary cells by ras requires either a cooperating oncogene or the inactivation of tumor suppressors such as p53 or p16. Here we show that expression of oncogenic ras in primary human or rodent cells results in a permanent G1 arrest. The arrest induced by ras is accompanied by accumulation of p53 and p16, and is phenotypically indistinguishable from cellular senescence. Inactivation of either p53 or p16 prevents ras-induced arrest in rodent cells, and E1A achieves a similar effect in human cells. These observations suggest that the onset of cellular senescence does not simply reflect the accumulation of cell divisions, but can be prematurely activated in response to an oncogenic stimulus. Negation of ras-induced senescence may be relevant during multistep tumorigenesis.

Daniel S Peeper,  Thomas Kuilman (2009)
Oncogene-induced cellular senescence constitutes a strong anti-proliferative response, which can be set in motion following either oncogene activation or loss of tumour suppressor signalling. It serves to limit the expansion of early neoplastic cells and as such is a potent cancer-protective response to oncogenic events. Recently emerging evidence points to a crucial role in oncogene-induced cellular senescence for the 'senescence-messaging secretome' or SMS, setting the stage for cross-talk between senescent cells and their environment. How are such signals integrated into a coordinated response and what are the implications of this unexpected finding?