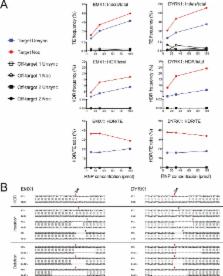 The CRISPR/Cas9 system is a robust genome editing technology that works in human cells, animals and plants based on the RNA-programmed DNA cleaving activity of the Cas9 enzyme. Building on previous work ( Jinek et al., 2013 ), we show here that new genetic information can be introduced site-specifically and with high efficiency by homology-directed repair (HDR) of Cas9-induced site-specific double-strand DNA breaks using timed delivery of Cas9-guide RNA ribonucleoprotein (RNP) complexes. Cas9 RNP-mediated HDR in HEK293T, human primary neonatal fibroblast and human embryonic stem cells was increased dramatically relative to experiments in unsynchronized cells, with rates of HDR up to 38% observed in HEK293T cells. Sequencing of on- and potential off-target sites showed that editing occurred with high fidelity, while cell mortality was minimized. This approach provides a simple and highly effective strategy for enhancing site-specific genome engineering in both transformed and primary human cells.

Efficient Delivery of Genome-Editing Proteins In Vitro and In Vivo

P A Wals,  Ronald de Vries,  Meena Shrivastav … (2007)
DNA double-strand breaks (DSBs) are critical lesions that can result in cell death or a wide variety of genetic alterations including large- or small-scale deletions, loss of heterozygosity, translocations, and chromosome loss. DSBs are repaired by non-homologous end-joining (NHEJ) and homologous recombination (HR), and defects in these pathways cause genome instability and promote tumorigenesis. DSBs arise from endogenous sources including reactive oxygen species generated during cellular metabolism, collapsed replication forks, and nucleases, and from exogenous sources including ionizing radiation and chemicals that directly or indirectly damage DNA and are commonly used in cancer therapy. The DSB repair pathways appear to compete for DSBs, but the balance between them differs widely among species, between different cell types of a single species, and during different cell cycle phases of a single cell type. Here we review the regulatory factors that regulate DSB repair by NHEJ and HR in yeast and higher eukaryotes. These factors include regulated expression and phosphorylation of repair proteins, chromatin modulation of repair factor accessibility, and the availability of homologous repair templates. While most DSB repair proteins appear to function exclusively in NHEJ or HR, a number of proteins influence both pathways, including the MRE11/RAD50/NBS1(XRS2) complex, BRCA1, histone H2AX, PARP-1, RAD18, DNA-dependent protein kinase catalytic subunit (DNA-PKcs), and ATM. DNA-PKcs plays a role in mammalian NHEJ, but it also influences HR through a complex regulatory network that may involve crosstalk with ATM, and the regulation of at least 12 proteins involved in HR that are phosphorylated by DNA-PKcs and/or ATM.

NFAT dysregulation by increased dosage of DSCR1 and DYRK1A on chromosome 21.

Nobuyuki Yamasaki,  Kunhong Kim,  Xin Gao … (2006)
Trisomy 21 results in Down's syndrome, but little is known about how a 1.5-fold increase in gene dosage produces the pleiotropic phenotypes of Down's syndrome. Here we report that two genes, DSCR1 and DYRK1A , lie within the critical region of human chromosome 21 and act synergistically to prevent nuclear occupancy of NFATc transcription factors, which are regulators of vertebrate development. We use mathematical modelling to predict that autoregulation within the pathway accentuates the effects of trisomy of DSCR1 and DYRK1A, leading to failure to activate NFATc target genes under specific conditions. Our observations of calcineurin-and Nfatc-deficient mice, Dscr1- and Dyrk1a-overexpressing mice, mouse models of Down's syndrome and human trisomy 21 are consistent with these predictions. We suggest that the 1.5-fold increase in dosage of DSCR1 and DYRK1A cooperatively destabilizes a regulatory circuit, leading to reduced NFATc activity and many of the features of Down's syndrome. More generally, these observations suggest that the destabilization of regulatory circuits can underlie human disease.